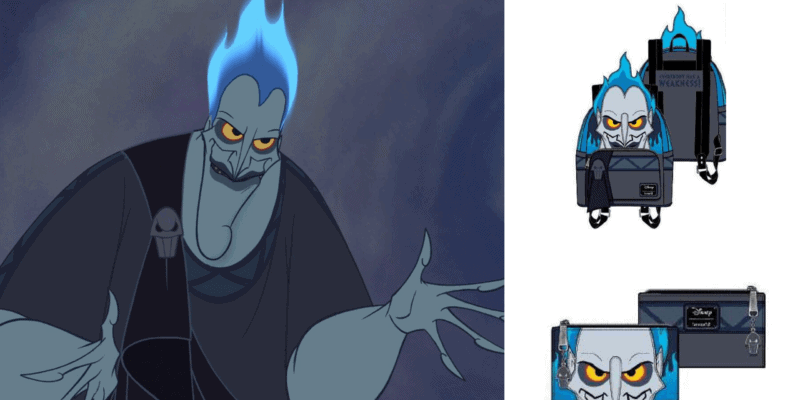 Fans of Hercules will be very pleased to see that Loungefly is releasing a brand new Hades collection that includes a mini backpack and wallet. The god of the Underworld has often been a huge fan favorite of many Disney fans and while we won’t get to see him at this year’s Mickey’s Not-So-Scary Halloween Party, at least this collection will keep our Halloween dreams alive!

The faux leather mini backpack retails at $79.90 and comes with the man himself clearly on show as well as the words ‘Everybody has a weakness’ on the backpack. It looks incredible, check out the full blue flame design below:

If you’re looking to spend a little less money and want to be a bit more subtle, the Hades wallet may be a bit more for you. Coming in at $42, the wallet looks great.

Both the wallet and backpack are available now for pre-order at Blueculturetees.com and are expected to begin shipping around mid-August.

Disney knew they were onto a winner with Hades when Hercules was released back in 1997 and since appearing in the original movie he has appeared in other feature films including:

The character has also appeared in a number of Disney theme park attractions, notably Fantasmic and Sorcerers of the Magic Kingdom. He was also one of the more popular antagonists of the Kingdom Hearts video game series.

Loungefly has been doing incredibly well with Disney collections over the years, here are just a few recent collections that are worth looking at:

Are you a fan of the new Hades Loungefly collection? Let us know in the comments below if you plan on buying!