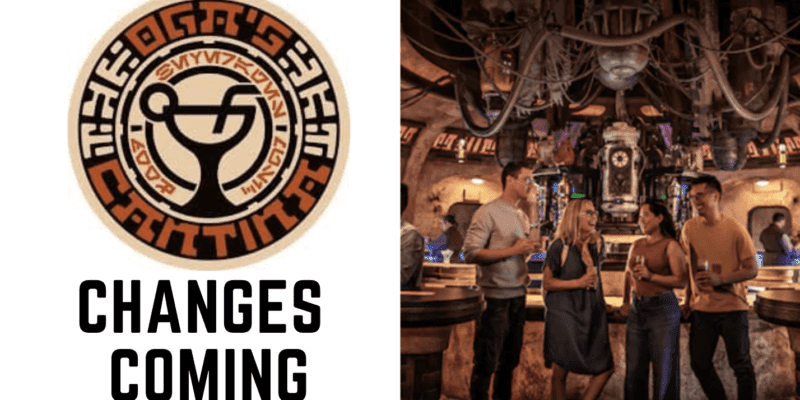 With Disney World Resort in Orlando, Florida set to begin its phased reopening of the theme parks on July 11 with the Magic Kingdom and Disney’s Animal Kingdom, Guests who managed to snag reservations for opening weekend are beginning to wonder what changes may await them when they arrive.

In addition to new social distancing measures and mandatory face masks, Disney World dining will look much different upon reopening. Recently, the official Disney World website was updated to include information about Oga’s Cantina, located in Star Wars: Galaxy’s Edge .

Although Oga’s Cantina will still be reopening with the rest of Disney’s Hollywood Studios, including Galaxy’s Edge, on July 15, Guests are being asked to “please note that this experience will be modified.”

Walt Disney World officials have not yet stated what the changes to dining at Oga’s Cantina will consist of, but there are certain steps that are likely to be taken. We’ve outlined them here, and we will share updates when we know more confirmed information from Disney.

Prior to the Disney Parks closure, parties at Oga’s Cantina were often seated together at large tables. To enforce Disney’s new mandatory social distancing measures, it is likely that tables will be limited to one party.

Because seating is extremely limited in the Oga’s Cantina establishment, this may mean that capacity will be even more limited than usual.

Due to the fact that there are very few tables in Oga’s Cantina, many patrons of the intergalactic bar chose to stand at the center bar area before the temporary closure.

Again, to encourage adherence to physical distancing protocols, Disney is likely to either close the bar area, or at lease strictly limit the number of Guests allowed at the bar and implement strict physical distancing. This will prevent mingling between Guests from different parties, potentially propagating the spread of the virus. Batuuvian cocktails and appetizers will probably be delivered to each party by a server as part of the modified Oga’s Cantina experience.

Disney Park officials have already added new signage regarding safety protocols, such as mandatory face coverings, throughout the Disney World theme parks. In all likelihood, there will be new signs directing Oga’s Cantina patrons throughout the bar.

This is a simple step that will help Disney Cast Members enforce new health and safety measures that are designed to protect everyone during the Hollywood Studios reopening process.

Even though you won’t see Han Solo at Oga’s, it’s still a must-visit bar for any Star Wars fan. Don’t let this modified experience deter you from visiting next time you’re craving a drink in Star Wars land.

What do you think about a modified Oga’s Cantina experience? Will you still be visiting for a Fuzzy Tauntaun drink next time you go to Batuu?

If you have questions about Disney‘s new reservation system, make sure you let the experts at Acadmey Travel help you plan your next theme park vacation. They will help you understand general admission and Passholder entry at this time, plus snag any dining reservations you need during the reopening period. Give them a call before your next trip to Walt Disney World Resort!