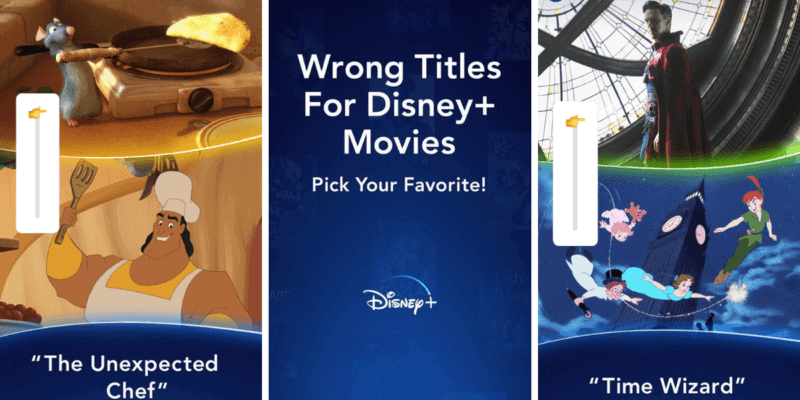 Disney+ is home to a lot of movies from Disney, Pixar, Lucasfilm, Marvel, and National Geographic, and it appears that some of those movies have a lot in common. At least, enough in common to have the same name.

To prove this, Disney+ had some fun on Instagram stories and posted two movies side-by-side with a title that is very wrong but somehow accurately describes them both. And Disney+ wants its fans to decide which is the best.

Starting things off with a rather obvious one. Loki is definitely the more magical of the two Odenson brothers while Ian Lightfoot holds the magic compared to his brother Barley.

“Bad Uncle” – The Lion King & DuckTales The Movie: Treasure of the Lost Lamp

Yes. Both these movies involve an uncle that behaves very badly. But one uncle just might be a little worse than the other.

Both characters are chefs, and fantastic ones at that. But for everyone who had already seen The Emperor’s New Groove, is it really unexpected to see Kronk as a chef?

We might not have thought about Peter Pan like this before, but Disney+ has a point. While Dr. Strange has the Time Stone, Peter Pan seems to control time in his own way, too. He takes Wendy, John, and Michael to Neverland before 9 p.m. They spend two days there but somehow return home before midnight the same night they left? Definitely some time wizard business going on.

This one seems pretty self-explanatory. Both movies show a lot of dogs. But one cast might be a little more concerned about schools reopening than the other.

Both movies show hard workers risking their lives to achieve something amazing. But after that, I guess it depends on your definition of scary.

You can go onto Disney+’s Instagram page to watch the story for yourself and rank each wrong title. They say that only a few stories are ever told, and it looks like it might be true.

Disney+ ended this little segment reminding its followers that all of these movies and more are now available for streaming on Disney’s own streaming service.

Comments Off on Disney+ Gives Classic Movies ‘Wrong Titles Only’