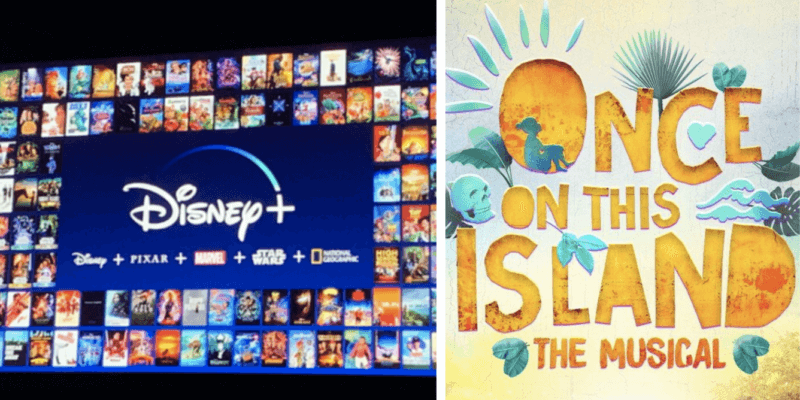 Following the smash success of Hamilton‘s 4th of July weekend debut on Disney+, it has just been announced that Disney is developing another Broadway musical for the streaming platform.

As per a Hollywood Reporter article today:

“Playwright Jocelyn Bioh and director Wanuri Kahiu are developing Once On This Island, a feature adaptation of the 1990 Broadway musical that is based on the Rosa Guy novel, My Love, My Love; or, The Peasant Girl.”

The Disney+ adaptation of Once on This Island will be produced by Marc Platt, who is the creative mind behind Broadway’s Wicked and films like Legally Blonde and La La Land.

According to Hollywood Reporter’s information, this will not be a filmed stage production like the Disney+ version of Hamilton. Instead, Disney’s live-action film division is heading the Once on This Island project.

Despite initially running for just one season on Broadway, Once on This Island has a passionate following and won an Olivier Award for a mid-1990s production in London’s West End theatre district. It’s 2017 Broadway musical revival earned multiple Tony Award nominations.

Wikipedia describes the storyline of Once on This Island as the following:

Based on the 1985 novel My Love, My Love; or, The Peasant Girl by Rosa Guy, it is set in the French Antilles archipelago in the Caribbean Sea. It concerns a peasant girl on a tropical island, who uses the power of love to bring people together of different social classes.

The story was reportedly inspired by Hans Christian Andersen’s original version of The Little Mermaid in which the main character strives to bring together occupants of the land and sea.
As for the team behind the upcoming Disney+ adaptation, Bioh is is known for the popular off-Broadway play School Girls (AKA The African Mean Girls Play) and Kahiu is the first Kenyan to ever have a film screened at the prestigious Cannes Film Festival.
Are you excited to see the Disney version of Once on This Island streaming soon?