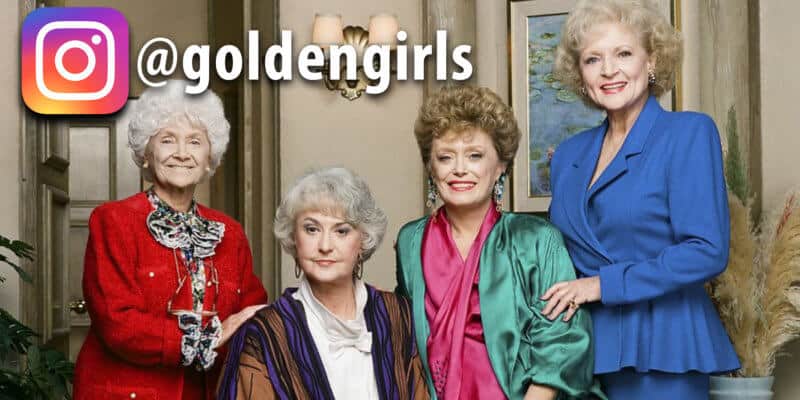 It’s official, your favorite confidants are now on Instagram and to celebrate Disney is hosting a special live event with Queer Eye host Jonathan Van Ness and Marc Cherry, a writer from the original 80s sitcom.

For those who are not familiar, The Golden Girls originally aired on NBC back in 1985 and ran through 1992. The show was a half-hour sitcom starring Bea Arthur, Betty White, Rue, McClanahan, and Estelle Getty, and revolved around these four ladies who all shared a friendship and a home in Miami, Florida.

The show was produced by Witt/Thomas/Harris Productions, in association with Touchstone Television (Disney). The show, which is still in syndication on television today, and runs on a marathon every Sunday on TV Land (in most markets), has now officially made it into the new Millenium with the permanent staple of an Instagram (@goldengirls) account–and we couldn’t be more excited!

As of yet, the new account features a series of image posts that come together to form a large mural image of the golden cast. In the account’s bio, it reads: “Thank You For Being A Friend” with the most appropriate emoji: cheesecake.

Have your favorite cheesecake ready and celebrate #GoldenGirlsDay on IG Live with Marc Cherry, writer on “The Golden Girls,” and @jvn, lifelong #GoldenGirls fan and host on “Queer Eye” & the “Getting Curious with Jonathan Van Ness” podcast! All the fun starts Thursday at 1pm PST / 4pm EST. • • • Need a refresher? Re-watch the entire series now streaming only on Hulu!

The live stream begins Thursday at 1 pm PST/4 pm EST. We’re not sure exactly what Van Ness and Cherry will be discussing on the stream. However, we can only imagine it would be a look back at the iconic series’ long and hilarious history.

For those who want to revisit the series prior to this special event, we recommend turning to Hulu where the entire series is currently available for streaming!

Will you be following The Golden Girls on Instagram on their new account and tune in to the special live stream celebrating their arrival to the social media platform? Let us know in the comments!