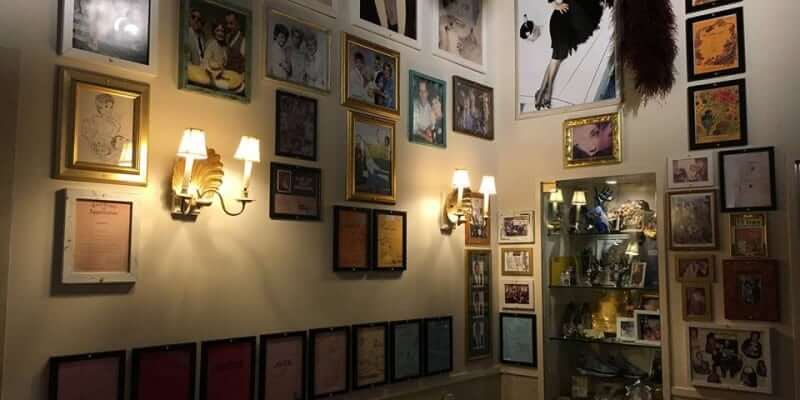 Dedicated to the late actress Rue McClanahan, known for portraying the character Vivian Harmon and more recently, Golden Girl Blanche Devereaux, the Rue La Rue Café is now open for business.  Located in the Washington Heights area of Manhattan, the venue is not only dedicated to actress, but will feature memorabilia from the “Golden Girls” television series.

A piano provides a perch for the mannequin wearing one of McClanahan’s costumes from the “Golden Girls”. Her Emmy award is displayed along with several sconces and a bright yellow telephone (both from the show’s sets). Rue’s personal artwork shares space with the scores of photographs adorning the café’s walls.  Owner Rue McClanahan says the various costumes and artwork will be rotated out and replaced with more from McClanahan’s collection. The highlight of the European café’s fare are the decadent desserts. These include Dorothy’s salted caramel cheesecake and shredded coconut topped “Betty White Cake.” “The Rue La Rue cheesecake tasting at the bakery up the street (Choc/ nyc)-  and the owners of this new neighborhood pastry shop created four unbelievably delicious cheesecakes for the girls. Dorothy’s Salty Caramel Cheesecake has a caramel lava center and it left us stunned, just stunned. You are going to LOVE the cheesecake at Rue La Rue! CHOC/nyc, Chef Jemal and Brad, thank you for being a friend!” –Rue la Rue Café Facebook page