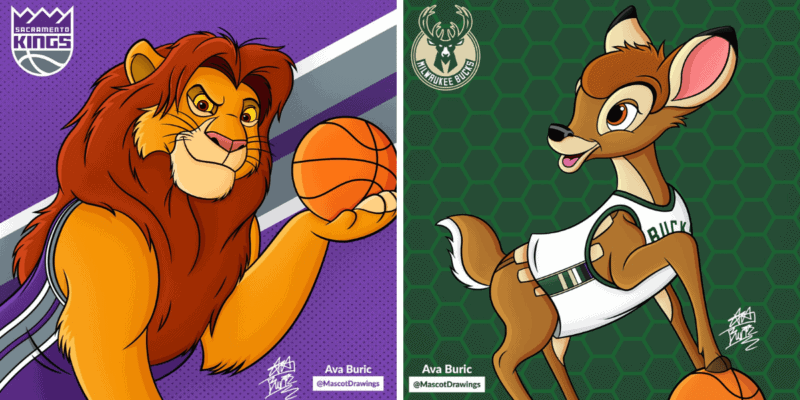 As the NBA continues to complete its season in its Walt Disney World Bubble, artists on social media have begun to ask the question, “What would Disney-fied NBA logos look like?”

Well, we at Inside the Magic shared one artist’s work a few weeks ago, and we found another one.

Ava Buric (@AvaDrawsThings on Twitter; @MascotDrawings on Instagram) gave her own take at Robin Lopez’s approaches to Disney NBA mascots.

Excited to finally reveal the first batch of illustrations based on @rolopez42's Disney NBA mascot replacements! ??

Check out the thread below for the full images ⬇️ pic.twitter.com/uDcxRq8WDF

He may be a Sorcerer’s Apprentice rather than a wizard, but Sorcerer Mickey is the poster child of the Washington Wizards. Pixar is also represented. Heated Angry from Pixar’s Inside Out is the new mascot of the Miami Heat.

It is so interesting to see iconic Disney characters representing these NBA teams. When @AvaDrawsThings shared these illustrations with us, she said she wants her art to “bring joy to other Disney and NBA fans in this crazy time we’re living in!”

When asked which illustrations is her personal favorite, Ava said, “I’m pretty biased towards the Sorcerer Mickey illustration. I purposely wanted to work on his last since making artwork for a character so iconic felt extremely special to me. The details really make it stand out!”

NBA players are currently completing their season at the ESPN Wide World of Sports Complex and staying at the Gran Destino Tower at Disney’s Coronado Springs, Disney’s Grand Floridian Resort & Spa, and Disney’s Yacht Club. A few of these players, like Robin and Brook Lopez, are notably major Disney fans as well.

The NBA will officially recommence its season on July 30.

But the rest of Walt Disney World is once again reopened to the public, and if you are looking to plan your next trip, our friends at Academy Travel are standing by ready to help you create the most magical trip possible! Click here to learn more and receive a free, no-obligation quote today.

What do you think of these mascots designs? Let us know in the comments!