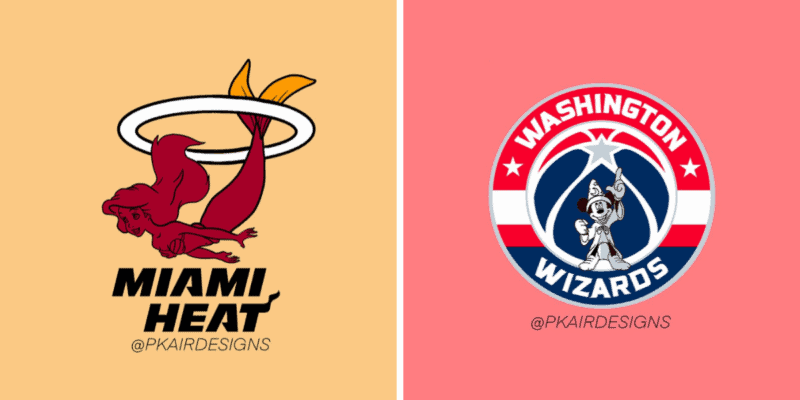 The NBA is going to Walt Disney World! As excitement builds for the return of this professional sport, as well as the fact the season will be held at the Place Where Dreams Come True, one artist has taken the liberty to mark the announcement in her own awesome way.

@pkairdesigns of Melbourne, Australia decided to Disney-fy some of the NBA’s most well-known team logos.

The first two she shared were of the Boston Celtics and the Milwaukee Bucks. Dressing Mickey Mouse as Lucky the Leprechaun, and replacing the Buck with Bambi, @pkairdesigns shared the designs on her Instagram saying:

“Disney x NBA mashup logos following the recent announcement!! Keen as to get some more done, let me know what teams you want to see next.”

Disney x NBA mashup logos following the recent announcement!! Keen as to get some more done, let me know what teams you want to see next! ????

She followed her first two logos by adding Rex from Toy Story into the Toronto Raptor’s logo and replaced the Golden Gate bridge with Sleeping Beauty Castle in the Golden State Warriors logo.

Couple more Disney x NBA logos I did this afternoon! ???

But PK didn’t stop there. In fact, she got more creative with the designs. She featured Bonzai the hyena from Disney’s The Lion King as the Minnesota Timberwolves’ Crunch the Wolf and Pumbaa as Benny the Bull for the Chicago Bulls.

Disney X NBA logo designs ?? loved playing around with some lion king characters today, which one is your favourite? ?

Her latest post features Winnie the Pooh as Grizz from the Memphis Grizzlies, and she gives the LA Lakers Mouse Ears.

Disney X NBA logo designs ?? Lakers were highly requested so those that were patiently waiting, I want to hear your thoughts!!!??

The artist has made it clear she’s not done yet. Not only does she want to hear your thoughts on her designs, but also it appears she is taking requests as well.

She has since caught the attention of ESPN who shared most of her work in a thread on Twitter. Disney fans will notice Sorceror Mickey references in the logos for the Orlando Magic and the Washington Wizards. New Orleans Pelicans were given a Finding Nemo treatment. The Little Mermaid replaces the flames for the Miami Heat, and the Houston Astros feature the Pizza Planet rocketship.

Here is a closer look at some of those logos:

22 teams will be converging on the Walt Disney World resort to complete the 2019-20 season and include the following teams:

Here's who's in, according to @wojespn. pic.twitter.com/8s0qYYgLtt

It will be interesting to see if this artist takes up the challenge of giving all 22 teams a Disney twist. Follow her on Instagram to keep up with her latest work.

While it is exciting to see the NBA going to Disney World, it will not be a vacation. The NBA will reportedly ensure that players will be under strict guidelines during their stay. When they are not playing games or practicing at the ESPN Wide World of Sports Complex, they will apparently be staying at three Walt Disney World Resort Hotels. Play is set to resume on July 31 and expected to end no later than October 12.

Are you excited to see the NBA return? What do you think about Disney World hosting the entire season? Let us know in the comments!