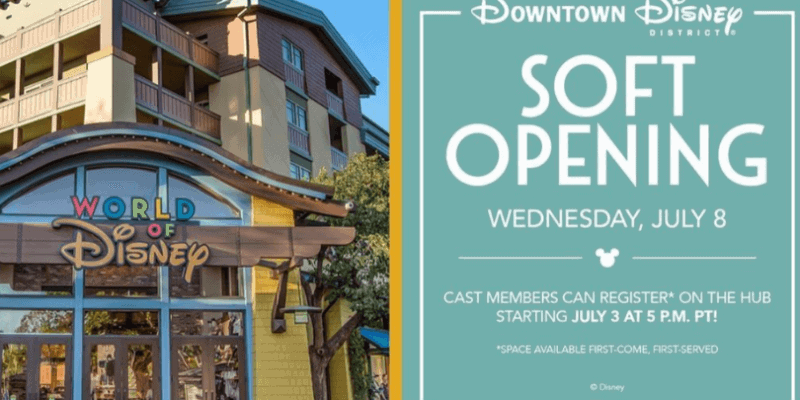 This just in: Disney has announced that Cast Members will get to experience Downtown Disney at Disneyland Resort one day before it reopens to the public!

Downtown Disney District will be reopening to Guests on Thursday, July 9.  Not all the storefronts will open on that day, but they will start bringing back the Disney magic slowly.  The day before they open to Guests, however, Disney will be allowing Cast Members to get the first look at Downtown Disney operations with new health and safety protocols.

There will be a registration held tomorrow, Friday, July 3 starting at 5 p.m. for Cast Members to sign up on the HUB.

Cast members! Before guests get a chance to visit, YOU may have the opportunity to be one of the first to enjoy the Downtown Disney District on Wednesday, July 8. Registration will begin Friday, July 3 at 5 p.m. Full details can be found on the HUB. #DisneyCastLife

A post shared by Disneyland Resort Ambassadors (@disneylandambassador) on Jul 2, 2020 at 6:34pm PDT

One reason for the Cast Member preview day at Downtown Disney may be to help ensure a limited capacity of attendance or to give an allotted time of arrival for physical distancing.  It’s also possible that this will help put some Cast Members’ minds at ease if they are wary of going back to work, as Cast Members at the Downtown Disney preview are able to see first hand what protocols and procedure are being taken at the Disneyland Resort.

At Disney Springs, the version of Downtown Disney at Walt Disney World Resort, some Cast Members shared that they felt safe being back at work.  Additionally, a couple of Cast Members from across the country at Walt Disney World shared their concerns prior to go back to work, but feeling comfortable after the first few days of arriving back to work.

As many people have heard, there is  a new ordinance set by California State Governor Gavin Newsom that prohibits indoor dining.  Though it has been made clear that this won’t affect the actual opening of Downtown Disney itself, it is delaying some of the restaurants from opening up at their original set time.

Additionally, Downtown Disney will be opening with extra health and safety precautions.  This will be a good first step to reopening the Disneyland Resort as the proposed plan to opening the theme parks have been delayed until further notice.

We will continue to update with more information as we hear from both Disneyland Resort and Cast Members.

Comments Off on Downtown Disney to Reopen Early for Cast Members