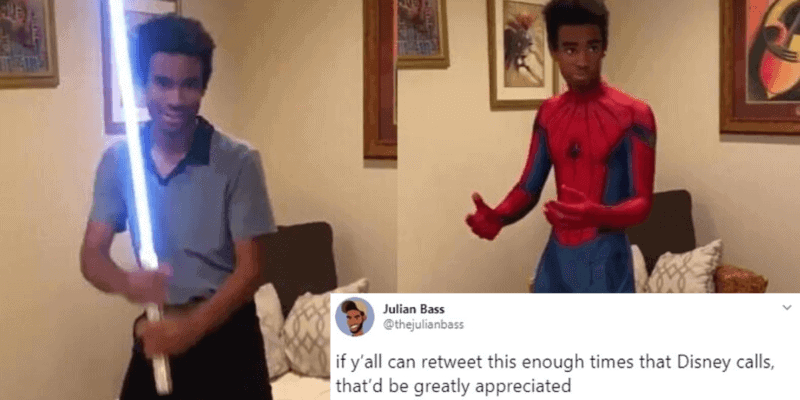 A talented student and Disney fan has caught Bob Iger‘s attention — and it looks like he might have a job at Disney in his future.

Julian Bass took to social media this week to share a special effects video he created in which he takes on the looks of his favorite heroes, from a Star Wars Jedi to Marvel’s Spider-Man. And from what we can tell in the video, Bass is highly talented. He is able to use technology to create a video that has caught the attention of millions of viewers, including Disney Chairman Bob Iger, Marvel director James Gunn, actors Josh Gad and Mark Hamill, Into the Spider-Verse director Peter Ramsey, Oscar winner Matthew Cherry, and many, many more.

Bass shared his video on TikTok and Instagram, but he interacted with some of Hollywood’s best on Twitter.

He Tweeted, “if y’all can retweet this enough times that Disney calls, that’d be greatly appreciated.” And it turns out, Iger responded, saying, “The world’s gonna know your name!!!” to which Bass replied, “This is the beginning!!!” and “Let’s schedule a time to talk!!!”

Take a look at not only Bass’s video, but also his interaction with Iger below:

The world’s gonna know your name!!!

Let’s schedule a time to talk!!!

Marvel and DC director James Gunn was also impressed with Bass’s creative work. Actor Zach Braff even said, “Hire this man, Gunn!” and fans across the internet even asked Marvel and Sony to cast Bass as Miles Morales in a live-action version of Spider-Man: Into the Spider-Verse, which won awards as an animated film.

Bass, a student at Georgia State University, has even had his video shared on Good Morning America. “I just kind of was saying to myself, ‘Wouldn’t it be funny if Disney called me?'” Bass said in a GMA interview. “It’s kind of surreal.”

This student's visual effects catch the eyes of Hollywood. Julian Bass, the Georgia State University student behind the impressive effects, is winning over some big-name fans. @janai has more. https://t.co/IwSFfXObyy pic.twitter.com/ir9zfQWrRS

It’s clear that Bass has garnered hundreds of thousands of fans online and many in Hollywood. So could we see either an acting role at Disney in his future, or will he be working behind the scenes on the next big Marvel or Star Wars flick? Only time will tell, but one thing’s for certain: this college student has a whole lot of talent that won’t be passed up.