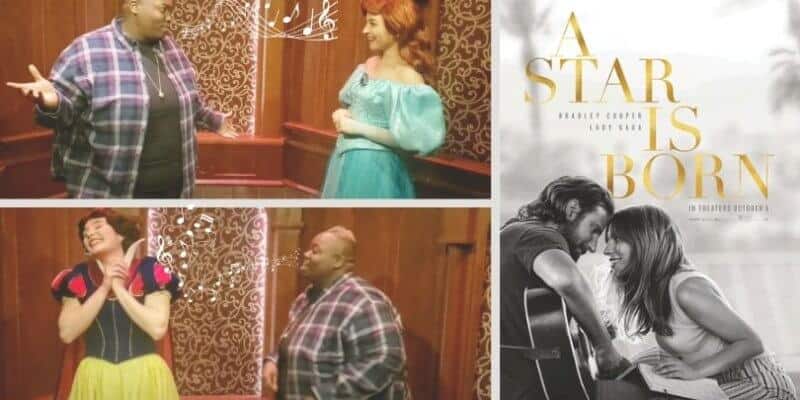 Most Disney fanatics have some kind of story on how Disney is important to them, or how it affected [affects] their lives; helping you through a rough patch, inspired you to do things you never though you could, or just an escape outlet. Whatever the reason is, we all know Disney has touched some part of us.

And for Disney lover Rodney Jr. [aka. RJay], the story was no different.

RJay’s love for Disney started at a very young age. His grandparent have been taking him to Disneyland since he was two-years-old. Those early Disney experiences were the marker on his love for Disney and his family bond.

“Disney for me has always been a string connection to family, love and the power of imagination” said RJay to ITM. “For as long as I could remember I have been watching Disney movies, shows and singing all of my favorite Disney anthems.”

How was my first character moment at @Disneyland??? Let's just say.. it was very memorable! Btw I absolutely adore Gummi Bears now, and watch it every night on @disneyplus #disneymagicmoments ??

So, it’s no surprise that one of RJay’s favorite things to do at Disney Parks is to go to the meet and greet with his favorite Disney characters.

“Meet and greets are so magical because, it’s almost like meeting a celebrity or someone famous when I see the characters. One of first things I think of is the music from their movie!”

Big shout out to each and everyone of you who reached out to wish me Happy Birthday! This one was definitely one for the books, and I spent my entire Birthday weekend – weak and sick with stomach flu, although I am still getting over it the best part of getting sick now is I got all my sick out and should be good for the whole year… right?!! Arent those the rules??!! Anyway again thanks for the Birthday Love! I did feel it! Cheers to another Best Life Year! #disney #disneyparks #disneylandresort #instadisney #disneygram #disneygrammers #blackboyjoy #melanin

Related: Did You Know Service Dogs Are Cast Members, Too? Meet This Magical Duo!

And it was during one of those meet and greet encounters that RJay decided to take leap of faith and sing.

“One day while Disney bounding Flounder, I thought it be great to get a picture with Ariel, and then it hit me! I should sing for her too, and I did!” he said.

That day, RJay sang put a “twist” to the song The Shallow, by re-imagining the song as Ursula would sing to Ariel. And his musical stunt wasn’t only a success with the princess.

Hey Friends! I noticed I have a alot more followers now, so I thought I'd come on here and introduce myself! I'm Rjay! LOVER of all things Disney I sing to Princesses ? ⬆️ I sing in ( Disney) Parking Lots #parkinglotthemusical I Disney bound I love to cook and eat (lol) I am Love me some Jesus I love my Hubby @jallenburns Epcot is my Favorite Disney Park I am the co- creator of @pixiedustedwithpride?️‍? I am a Music Artist working on a Disney Parks Music Project I also have a YouTube channel ( Link in bio) . . . So many of my wonderful friends have asked- if I plan a trip to Disneyland when they open ! I do plan to go back to Disney!! But not when they open – Fact is numbers in California are rising in the Thousands- not just because there are more test available. Someone like me who is immune compromised- has to weigh, if going to my happy place is really Necessary right now… and for me – thats a no! If you end up going have a blast no Judgement- but please be safe! ? . . In the meantime per your many request I have many more throwbacks of me singing to Princesses and singing in the Parking lot! Enjoy this fun Re imaging of " The Shallow" where I sang to Ariel and disney bounded as Ursula @thedisneybound – RJay #throwbackthursday #tbt #repost

“I was so nervous especially when I noticed all the people around filming me! But after I was done I was met with a thunderous applause and it gave me the confidence to do it again.”

That is who it all started. After Ariel, RJay sang to Anna, Elsa, Mulan, Tiana, Cinderella and Snow White. But it’s not only to Disney princesses RJay has sang too.

“I even sang to the Big cheese himself and he made me and honorary Mouseketeer!” RJay said.

We asked him which princesses he is looking forward to sing to next.

“I would love to sing to Jasmine, Aurora, Belle and Rapunzel. Oh, and Definitely Pocahontas! Colors of the wind is my Jam!”

Related: VIDEO: Dapper Dans Gather (Virtually) to Sing “A Dream is a Wish Your Heart Makes”

However, Elsa for sure has a very special place in his heart. According to RJay, Elsa “embodies the true spirit of love and acceptance as well as growth and transformation.” His amazing interpretation on a beloved Disney character helped him in his own life.

“She live most of her life in fear, until that fear pushed her to expose her true self causing her to tap into her raw and powerful potential. Just when she though she peaked the part of her she always knew she had but never had access to called to her leading her to a bigger version of herself and how her being her true self changed the world.”

This song is dedicated to our fallen Pixies – who were slaughtered for simply being themselves! No one deserves death for being authentic – Sending Love and Pixie Dust to the families, friends, and Love ones who Morn this day.Thank you for giving me the courage to live authenticly. We must remember the most courageous thing someone can do is be their true selves ! Today I sing for you, and promise to take your Magic with me. #pulse #orlandostrong #pride #letitgo #frozen #LGBTQ #love #loveislove #lovewins #gaychristian #pride2020 #sing #instadisney #instagay #disneygram #disney #disneyparks #angry #flashbackfriday #fbf

It was that inspiration the Frozen Disney character gave him, the courage to be himself.

“Elsa gave me the courage to come out. To be free and now I am in my transformative state learning what I am really capable of.”

Like everyone else, RJay is excited about the Disney Parks reopening dates.

“I am really excited about the day when it is once again safe to serenade my favorite Disney characters.”

Related: VIDEO: Bring Back The Nostalgia With Disney ‘Sing-Along-Songs’ and ‘Mickey’s Fun Songs’

He is also the co-creator of the Instagram page @pixiedustwithpride, which is a profile that show “stories of love and acceptance by LGBTQ+ Disnerds.”

So, what did you think of RJay’s Disney Princesses singing stunts? Let us know in the comments bellow.

Comments Off on VIDEO: Disney Fan Sings to Princesses