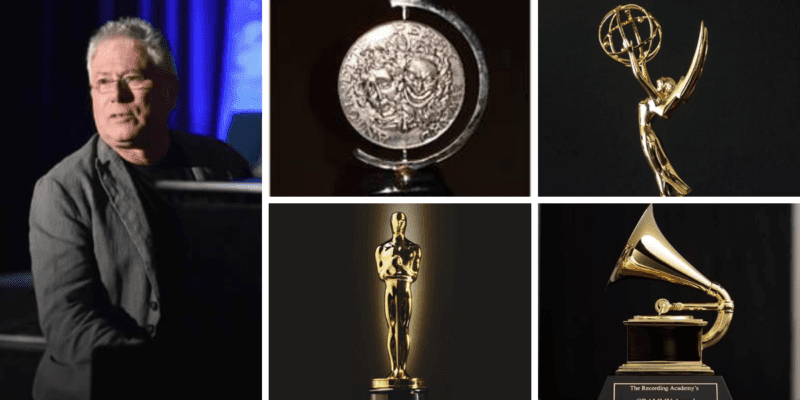 E.G.O.T.: Emmy®. Grammy®. Oscar®. Tony®. This legendary status is for only those artists who have won all four awards. Only 16 people have ever achieved this. And as of last night, Disney Legend Alan Menken has earned that EGOT status.

The composer responsible for a majority of the music from the Disney Renaissance and Disney Revival period earned a daytime Emmy for the song “Waiting in the Wings,” which he wrote with lyricist Glenn Slater for the Disney Channel show Rapunzel’s Tangled Adventure.

Menken’s journey to this legendary status began 30 years ago when he won his first Oscars (Academy Awards) for his work on Disney’s The Little Mermaid with the late great Howard Ashman.

Next came the Grammys. Menken won his first also in 1990 for The Little Mermaid, and has won 11 in total so far in his career.

Menken would have to wait over 20 years to cross the next threshold. The Disney Legend won his first Tony for Best Original Score for his work on Newsies in 2012.

While this was his first official Emmy, Menken was also awarded an honorary Primetime Emmy for his work on an anti-drug special in 1990 called Cartoon All-Stars to the Rescue. On the evening of July 26, 2020, his song “Waiting in the Wings” won the Daytime Emmy for “Outstanding Original Song in a Children’s Young Adult or Animated Program”.

Related: Alan Menken Launched His New Website and It’s as Magical as Expected

But D23 makes it a point to mention that Alan Menken has also entered LEGOT status. In 2001 he was awarded the illustrious title “Disney Legend.” Menken is only the second Disney Legend to achieve EGOT status. The first was Whoopi Goldberg in 2017 after winning a Daytime Emmy for her television show, The View.

Beginning with The Little Mermaid, Alan Menken has provided the music for several Disney Classics, including Aladdin, Beauty and the Beast, Hercules, Pocahontas, Home on the Range, and Tangled. He is currently working on the music for a remake of The Little Mermaid and a Beauty and the Beast prequel series centered around Gaston and LaFou bound for Disney+.

Are you surprised Alan Menken finally acheived EGOT status? What is your favorite Alan Menken song? Let us know in the comments!