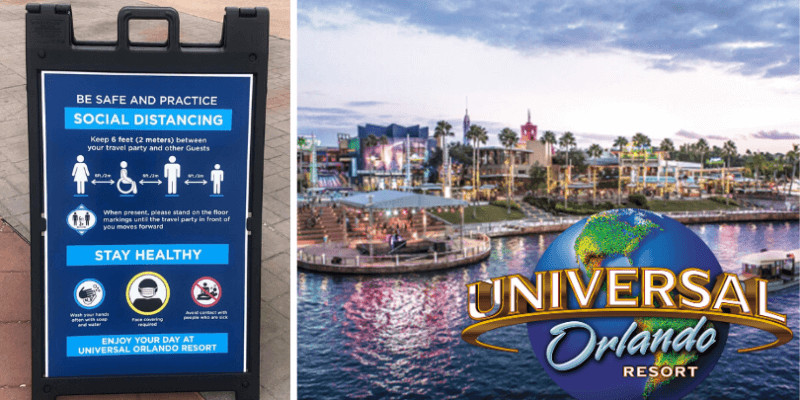 “We wanted them to work with their local governments, submit plans, and Universal did a great job, had a great plan, and I think as you have seen they are taking safety very seriously to keep their guests safe,” DeSantis said.

“This is the first time I’ve been to any park since they’ve reopened,” he said of Universal. “I have a newborn, a two year old, and a three year old, and you know it’s a little bit tough lift. I can tell you if they were five, seven, and eight we’d be here this weekend probably because I think the kids would really love it.”

The governor also shared that phase 2 of Florida’s reopening plan will begin on Friday, June 5. In phase 2, bars will be allowed to reopen with social distancing, and restaurants, bars, and pubs will begin to allow bartop seating. Bars and pubs will be allowed to reopen at 50% capacity inside, full capacity outside, and it will be seated service to comply with social distancing. This means that the bars at Universal CityWalk — as well as those at Walt Disney World’s Disney Springs — could begin to reopen soon. He said that 64 of Florida’s counties will be able to move into the next step on Friday.

Inside the Magic was on the scene today at an annual passholder preview of Universal Studios and Islands of Adventure as they — along with Universal’s Volcano Bay water park and the Universal hotels — reopen this week. You can read our coverage here.

The Universal Orlando Resort officially reopens to the public on Friday, June 5.

You can watch the live stream of DeSantis’s briefing below:

DeSantis previously shared his support for central Florida theme parks reopening a few weeks ago during a roundtable with Vice President Mike Pence. During that roundtable discussion with government officials and theme park leaders, Executive Vice President and Chief Administrative Officer for Universal Parks & Resorts John Sprouls spoke about the steps that Universal has taken in order to reopen.

DeSantis and Pence both praised Universal Orlando Resort and Walt Disney World Resort for their efforts in reopening their theme parks. You can read our full story here.