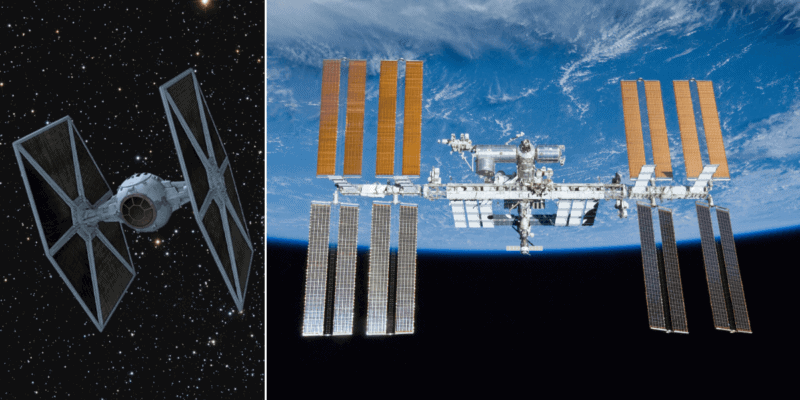 Not too long ago in a galaxy of our own, a NASA photographer captured images of the International Space Station as it passed in front of the sun. The shadow made laboratory look like a craft straight out of the Star Wars Universe.

The picture, taken by NASA Photographer Joel Kowski, was then shared by Twitter user @StarWarsWorld12 who said:

“ISS looks like a Star Wars TIE fighter as it crosses the sun in NASA image.”

ISS looks like a Star Wars TIE fighter as it crosses the sun in NASA image – CNET https://t.co/WLoOWQINDk

NASA shared this composite image on its website with the caption:

“This composite image, made from six frames, shows the International Space Station, with a crew of five on board, in silhouette as it transits the Sun at roughly five miles per second, Wednesday, June 24, 2020, from Fredericksburg, Va. On board are Expedition 63 NASA astronauts Chris Cassidy, Douglas Hurley, Robert Behnken, and Roscosmos cosmonauts Anatoly Ivanishin and Ivan Vagner.”

You can see all six frames and the transition video on Flickr.

To the untrained eye, it is quite easy to see how the ISS resembles the shape of the TIE fighter.

Its massive square solar arrays stretched out on either side of the central habitation areas, and that combination makes it appear just like a TIE fighter with its solar wings and command pod. And a place of international cooperation ironically appears as some stormtrooper pilot patrolling our planet’s orbit. As if our planet is the Galactic Empire’s next great conquest.

But the International Space Station has recently become a place where science fiction has become real life. In its 20+ years of continuous human occupation, it has been visited by commercial cargo ships, and currently hosts the first crew to use the privately built SpaceX Crew Dragon spacecraft.

If you want to try and catch the ISS in the sky yourself visit NASA’s spot the station website to find out when it will pass over you next.

For those who just want to go back to a Galaxy Far, Far Away, remember that every episode of the Skywalker Saga is now on Disney+ along with every season of Star Wars: The Clone Wars, Star Wars: Rebels, and Star Wars: The Mandalorian.