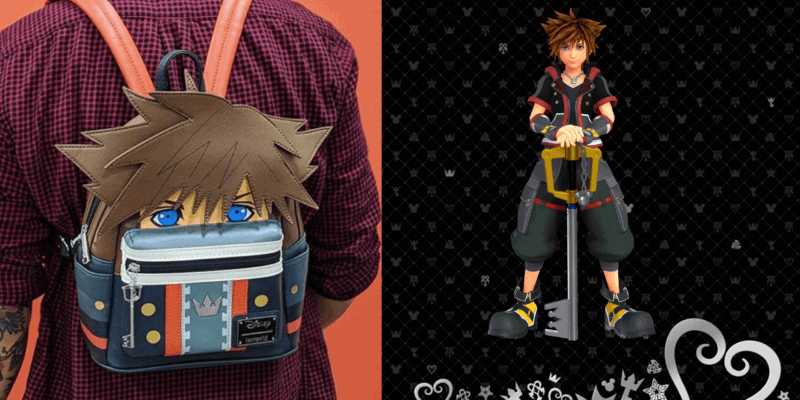 There has recently been a lot of good news for fans of Kingdom Hearts. First, we had the huge announcement that Disney is reportedly working on a television show set to debut on Disney+, and now we have more merchandise to get excited about, this time in the form of a Loungefly backpack.

This new backpack has the focus character for the main entries of the Kingdom Hearts series and is currently exclusive to GameStop. Check out the Sora Loungefly backpack in more detail below:

We love the detail on this mini backpack with the Keyblade attached to the zipper and they even managed to capture Soras hair perfectly.

Kingdom Hearts has been around since 2002 when the first video game was released and has been popular with many Disney fans since. Though the story can often be a bit convoluted (you really need to concentrate when you’re playing the games), the blend of characters from developer Square Enix and Disney really does create a match made in heaven.

With the release of Kingdom Hearts 3 last year, the series proved that even after over a 10-year gap between the release of main entry games, the games can still sell. Coming from someone who has played the entire series, the third really is worth picking up, even if you haven’t played the others (it comes with lots of videos to bring you up to speed on the events so far).

Related: Why Kingdom Hearts 3 took so long to make

With the Disney+ show rumored to be in the works, there is going to be a huge increase in merchandise over the next few years. With Donald Duck, Goofy and Sora all looking likely to be the stars of the show, it’s going to be a very interesting period for fans of the series.

What do you think of the faux leather Loungefly Sora backpack? Let us know in the comments below!

Comments Off on Level Up With This ‘Kingdom Hearts’ Loungefly Backpack