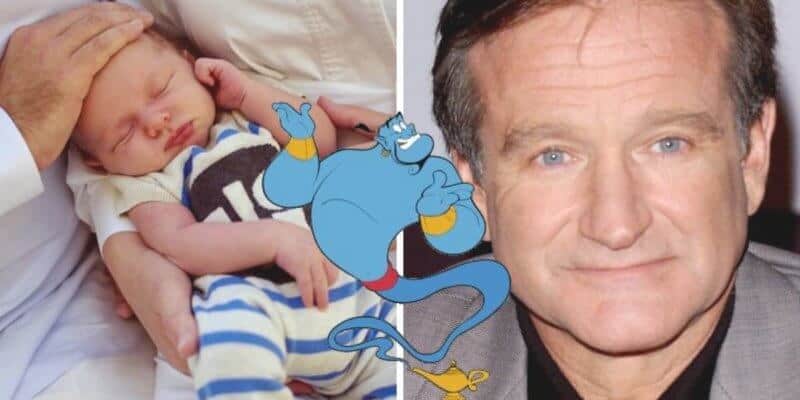 Robin Williams passed away at the age of 63 in his home in 2014. The late actor took his own life after being recently diagnosed with Parkinson’s disease. But that doesn’t mean he is forgotten as his legacy still goes on. In fact, now, his one-year-old grandson is now learning all about the late actor through Disney’s animated classic, Aladdin.

Robin Williams’ son, Zak, wanted his baby boy, Mickey, to learn about his late father and keep his father’s memory alive so he decided to do so in a unique way.

Mickey, unfortunately, never had the chance to meet his grandfather, but Zak still wanted to introduce him to his talented late father. In a recent interview with PEOPLE magazine, Zak, who is on the Advisory Board of a new mental health program, shared that his son is slowly being introduced to his late grandfather through his old movies, including the Disney animated classic, Aladdin.

Zak explained that he and his fiancée, Olivia June, have both been contemplating and trying to figure out how to introduce Mickey to the late Robin Williams. “The key thing would be for us to introduce it slowly and meaningfully. Taking an opportunity to share stories and his values in a way that we hope can be appreciated and embodied,” Zak stated.

But it seemed as though there was only one solution. “Certainly through his movies and the cartoons that he participated in is a great way,” Zak said.

But watching movies isn’t the only way Mickey is learning about his late grandfather. Zak explained how Mickey has cels (which are transparent sheets of celluloid that are used in the production of cartoons) in his bedroom with Genie from Aladdin on them. Mickey will “point at” these cels and interacts with them daily as he continues to learn about Robin Williams and his legacy.

“He’s got a collection of photos and animation cels throughout our home that he sees on a daily basis. I think it’s being mindful and introducing the elements and stories about him slowly,” Zak shared.

“We hope that we can celebrate the positive elements and his works and films in a way that there can be appreciation and acknowledgment of him both as an entertainer, but also as a family man, and parent and grandfather to my son.”

We love how Mickey is learning about the late Robin Williams, aren’t you? Let us know in the comments.