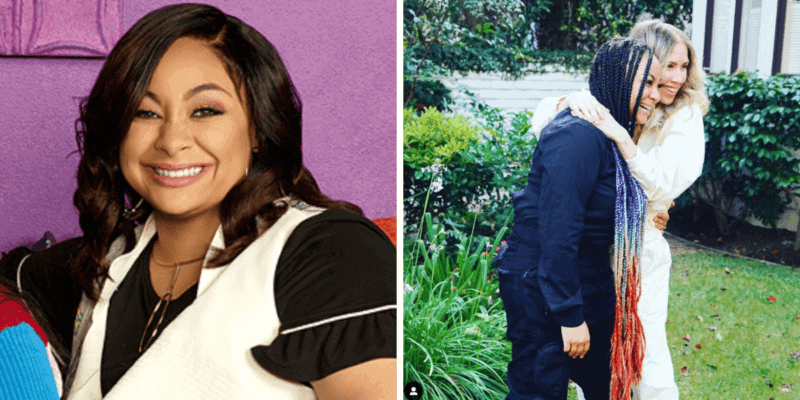 Raven Symoné is now married! The Disney Channel star got hitched to her girlfriend, Miranda Pearman-Maday, in a very small ceremony this week.

The star of Disney Channel fan favorites like The Cheetah Girls, That’s So Raven, and Raven’s Home announced her nuptials on Instagram. First, she only hinted at it, writing “So something happened this week, that has changed my life FOR THE BETTER!”, and then she shared a follow up post, sharing the following:

“I got married to a woman who understands me from trigger to joy, from breakfast to midnight snack, from stage to home,” Symoné captioned a sweet shot of the two sharing an embrace on their special day.

So something happened this week, that has changed my life FOR THE BETTER!

I got married to a woman who understands me from trigger to joy, from breakfast to midnight snack, from stage to home. I love you Mrs. Pearman-Maday! Let’s tear this world a new asshole!!! I’s married NOW

Considering the current circumstances, Symoné and Pearman-Maday elected to keep the ceremony intimate, and Symoné made it a point to thank everybody for understanding why they elected to do so.

“Thank you to all those who helped and for those who understand why it was small during this time,” she posted.

Thank you to all those who helped and for those who understand why it was small during this time.

It is not out of character for Symoné to have such a small ceremony. The 34-year-old actress has remained very private, opening up briefly about her personal life and sexuality in 2016.

“I never thought I would come out because my personal life didn’t matter,” Symoné shared in Lexus L/Studio‘s It Got Better docu-series. “It only mattered what could be sold as part of the Raven Symoné brand.”

According to People magazine, Symoné said she  knew she was gay by the time she was 12 years old, and she even had some awareness of it when she was “10, in the single digits.” But, the magazine reports,  she tried to force herself to like boys. At one point she even convinced herself that she would marry a man eventually.

“I kind of pushed myself to open myself up to look for boys,” Symoné said.

“I felt lighter,” she recalled when she came out to her parents and the world. “I felt like I could go out and not have to put on 17 different hats to be myself.”

Since making her debut as Nebula Wade in the 1999 Disney Channel Original Movie, Zenon: Girl of the 21st Century, Raven Symoné became Raven Baxter on the show That’s So Raven, and has made a name for herself as a Disney Channel icon in the eyes of all Disney fans who grew up in the early 2000s.

In the midst of her show’s four-year run, Symoné also starred on episodes and TV movies of other Disney Channel shows, including The Proud Family, Kim Possible (Monique), and The Suite Life of Zach and Cody (Raven Baxter), and Corey in the House (Raven Baxter).

Symoné also became beloved for her film roles, landing leading and supporting roles in The Cheetah Girls movies (Galleria Garibaldi), as well as The Princess Diaries 2: Royal Engagement (Asana), and College Road Trip (Melanie). Symoné has also provided the voice for the pixie Iridessa in several Tinkerbell movies, and she has joined other Disney Channel stars on several occasions for specials and music videos.

But Raven (Symoné) will always be Raven (Baxter) and she is now back on Disney Channel as Raven Baxter in the show, Raven’s Home. She has even directed episodes of the show.