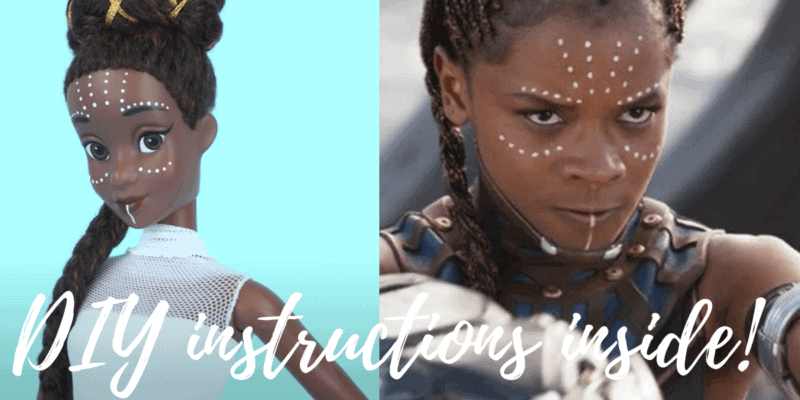 Here at Inside the Magic, we love us a good Disney Princess doll. We also love all things Marvel and especially the high-tech land of Wakanda, where Black Panther is King.

My Froggy Stuff is a fabulous mother daughter duo known for their artistic flare and love of all things toy and doll related! We simply love what they’ve done with T’Challa’s younger sister to give the iconic Marvel character the Barbie doll she deserves.

How to make a Princess Shuri Barbie doll

They started by taking an official Barbie doll of Disney Princess Tiana, to give the doll the proper Disney look.

They then painstakingly recreate Shuri‘s iconic hair and use face paint to represent her tribal dots as accurately as possible. They even give her a fabulous dress modelled on what she wears in Black Panther to really capture her movie look in toy form!

Marvel have never released a Barbie doll for any of their characters, though Captain Marvel‘s toy comes the closest. My Froggy Stuff thought they’d set this right by creating this gorgeous Shuri doll and we still can’t believe how well they captured the character‘s look; especially the doll‘s hair.

My Froggy Stuff even created a Wakandan lab for Princess Shuri to work in that Black Panther fans will simply love. She’s much more than just T’Challa’s sister; she may well be the smartest character in the MCU!

This is one for the Barbie history books.

Some might argue that Thanos’ daughters Gamora and Nebula are a better fit as the MCU’s Disney Princess, but Shuri is the only official princess we’ve got. Moreover, this is the Barbie doll that the world could really do with right now.

Black Panther is available to stream on Disney Plus. Its sequel is in the works and looks to collaborate with Beyonce in some capacity.

Will you be creating your own Shuri Barbie doll with DIY clothes? Let us know in the comments below.