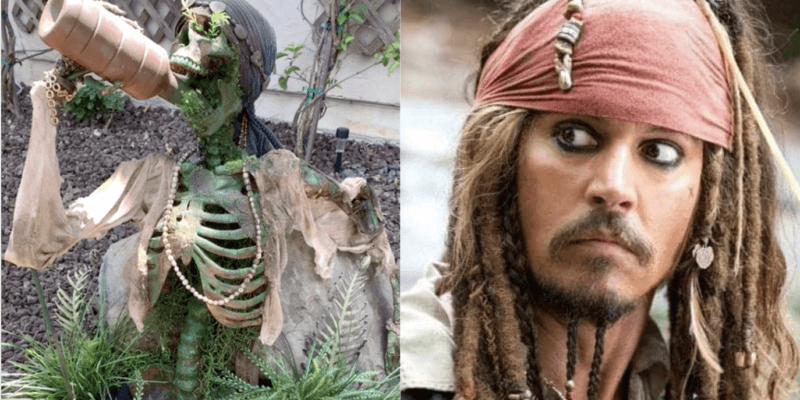 Pirates of the Caribbean is one of the oldest rides at Disneyland Resort. It opened on March 18, 1967, three months after Walt Disney passed away. POTC was the last Disneyland attraction Walt had a hand in creating.

As per an LA Times article about the history of the popular Adventureland ride:

“Originally envisioned as a subterranean, walk-through wax museum (an idea that had been tossed back and forth between Walt Disney and the park’s Imagineers since the late ’50s), Pirates became a water-based “dark ride” after the unprecedented success of of It’s a Small World’s at the 1964 World’s Fair.”

You can join the pirate crew at Disney Parks around the world. In additional to the original at Disneyland, Disney has created versions of the attraction at Disney World, Disneyland Paris, Tokyo Disneyland, and Shanghai Disneyland, as well.

Reddit user ZRE1990 has taken his passion for Pirates and turned it into an incredible piece of garden art by making his own skeleton fountain inspired by the Disneyland ride.

The impressive piece of Disney Parks fan art includes an amazing level of detail, down to the green patina on the skeleton’s “bones” and the foliage strategically growing around the fountain.

Fellow Reddit users loved the Disney fountain, with several requesting a “How To” tutorial from ZRE1990. DaringItLog said, “LOVE IT!!! Do you think you could post a build?? This is so neat!!”

Others were interested in purchasing a Pirates of the Caribbean outdoor fountain from ZRE1990. User KristinTroglin wrote, “I would seriously spend like two grand buying this from you,” and DarthRelkew posted, “That’s awesome. Like you could make some seriously good money selling fountains like this.”

ZRE1990 hasn’t committed to sharing a DIY tutorial or to launching a Pirates skeleton fountain shop, but either way, this amazing piece of Disney fan art is well worth checking out! A video of the fountain in action can be found below:

If I Can’t Ride Pirates, I’ll Bring Pirates To Me from Disneyland

We can almost hear the fountain whispering, “Dead men tell no tales” from the depths of Davy Jones’ locker.

Would you buy a Pirates of the Caribbean skeleton fountain? I would definitely add one to my backyard (maybe next to a replica of the Black Pearl!)

Comments Off on DIY Pirates of the Caribbean Skeleton Fountain