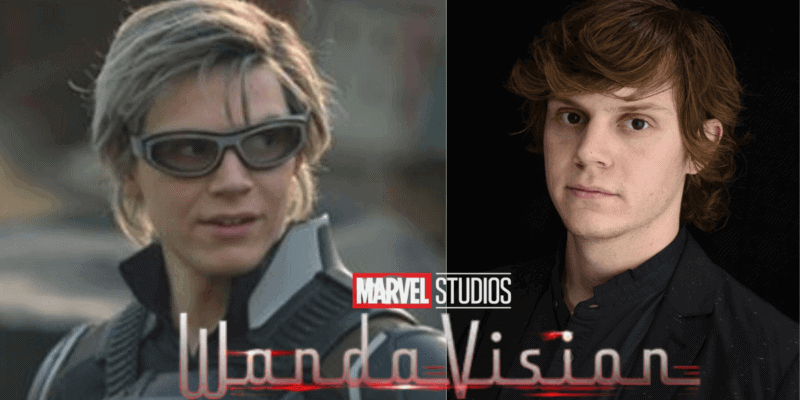 Yesterday, it was widely reported that Evan Peters, star of American Horror Story and the Fox X-Men series had been cast in the Disney Plus exclusive; WandaVision.

The report by Murphy’s Multiverse states that Peters has been signed on to play a mystery role in the Marvel tv series.

The ambiguous nature of this unspecified role sent the Marvel fandom into a frenzy, and for good reason.

Evan Peters could return as Quicksilver in the Marvel Cinematic Universe

The multiverse has again reared its head, as this report supports the theory that Disney and Marvel may be looking to cast iconic actors in their most famous superhero role while maintaining continuity.

Peters famously played Peter Maximoff / Quicksilver, starting in X-Men: Days of Future Past in 2014. While the movie was a huge hit with Marvel fans, Peter‘s Quicksilver was the undisputed breakout role. He later reprised his role in the less beloved X-Men: Apocalypse, but Peters still managed to deliver a fun, energetic performance.

Seeing Peters reprise his role as Quicksilver would be an insane twist to the WandaVision series, and there already seems to be precedent for it happening.

We already know that the WandaVision series ties in directly to Doctor Strange in the Multiverse of Madness, and that Elizabeth Olson will reprise her role as Scarlet Witch in that film.

Doctor Strange in the Multiverse of Madness (shockingly) will heavily feature the multiverse, a plot device that has been used in Marvel comics for years. It allows the Marvel universe to expand into different plains of existence, and take different versions of characters from different continuities.

Therefore, despite the MCU’s version of Quicksilver, Pietro Maximoff, brother of Wanda and Sokovian native appearing and dying in Avengers: Age of Ultron, we could still see the Fox version of the character without any lore-breaking issues.

This is incredibly exciting for any fan, as despite nobody really having a problem with actor Aaron Taylor-Johnson’s take on the character, most can concede that this is one rare instance where the Fox Marvel movies just did it better than the MCU.

If this was to happen, it also opens the door for other fan-favorite Marvel superheroes to play a key role in future entries in the cinematic universe, including mutants like Ryan Reynolds’ Deadpool and even Hugh Jackman’s Wolverine. Fingers crossed for Tobey Maguire’s Spider-Man 4 and a live-action Spider-Verse movie, too.

Bear in mind though, that none of this has been confirmed by Marvel or Disney. So, take this rumor with a pinch of salt. Peters may be simply playing a new character and his involvement altogether could be completely false.

Nothing is certain until we’ve heard it from Marvel Studios itself, but this is still an exciting prospect.

What do you think about Evan Peters’s alleged casting in WandaVision? Could and should he return as Quicksilver? Let us know in the comments below.