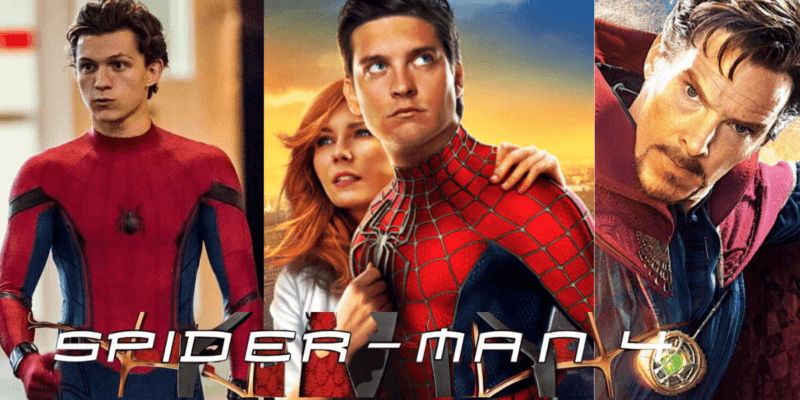 A year before the genesis of the Marvel Cinematic Universe, Sony released the critically panned Spider-Man 3 which saw Tobey Maguire‘s Peter Parker go up against Venom, The Sandman, and The ‘New Goblin’.

Marvel film fans were not happy and neither was director Sam Raimi. Rumors of interference from Sony were abundant and although the movie wasn’t a critical flop, it spelled the end of Tobey Maguire as Spider-Man. A mere three years later the studio would create a reboot movie: The Amazing Spider-Man starring Andrew Garfield. This, in turn, got a sequel that was so panned, the studio ended up sharing the character rights with Disney and Marvel Studios to give us the Tom Holland Spidey we all know and love.

But long before The Amazing Spider-Man, plans were in place to give Tobey Maguire‘s Spidey the send-off he deserved. And in my opinion, now is the time to revisit this franchise as the jumping-off point for the long-rumored live-action Spider-Verse movie that we’re all clambering for.

Spider-Man 4 was set to take us back to Peter’s roots and let this Spider-Man go out with a bang. A draft was written, storyboards were made and the film was even announced. Check out this tweet;

It regrettably never made it to theaters thanks to ‘creative differences‘ with the studio.

The plot of the cancelled script would obviously have to be binned thanks to the introduction of the Marvel Cinematic Universe‘s excellent take on The Vulture, but otherwise, the creative possibilities are endless.

And please don’t mistake me; I don’t want this instead of Tom Holland’s Spider-Man. I want it as well.

Ever since the beginnings of the Marvel Cinematic Universe, Hollywood has taken note of how being faithful to comic book properties can mean big bucks. We’ve seen how successful an animated Spider-Verse movie can be, now how about we reunite each actor who has portrayed Spider-Man in live-action.

Tom Holland. Tobey Maguire. Even Andrew Garfield. All in one huge Spider-Man movie. A return to the world of the Tobey Maguire Spider-Man (arguably the most comic accurate interpretation) is the perfect way to kick off this live-action multiverse.

And what is the perfect way to end the fourth installment of this beloved superhero franchise? A post-credits house call from Benedict Cumberbatch’s Doctor Strange.

It’s just too perfect. We know that the most mystical Marvel character is set to explore the multiverse in his upcoming sequel, so why not have him literally cross over into the Sam Raimi Spider-Man universe?

Oh, and who is the director of Doctor Strange in the Multiverse of Madness?

Oh my. This has to happen.

If Doctor Strange opened up his little circle portal at the end of a fourth movie in the Tobey Maguire Spider-Man franchise, I think I’d lose my mind.

But why not tie these superhero movies together? Marvel fans have long thought that the multiverse might be the best way to introduce The Fantastic Four and The X-Men into the Marvel Cinematic Universe, so why not a Spider-Man sequel too?

Doctor Strange in the Multiverse of Madness – 2022

It’s literally a story ripped from Marvel comics. Make this fourth film happen, Sony. This could be the first film in a whole new successful franchise. Let’s forget the script issues of Spider-Man 3 and see how Tobey‘s Spider-Man continues his story and even more interestingly, how he’d react to Holland and Garfield’s Spider-Men and the superheroes and villains of the MCU!

The multiverse seems to be the easiest way to tie together the Spider-Men of both the Marvel Cinematic Universe and the recently named *sigh* Sony Pictures Universe of Marvel Characters. It’s such an easy plot device, it seems mad not to do it; especially with Raimi at the helm of the Doctor Strange sequel.

Whatever happens, if we do see Tobey back as Spider-Man, I just hope he does this face again;

Would you like to see a live action Spider-Verse movie set in the Marvel Cinematic Universe? Let us know in the comments below.