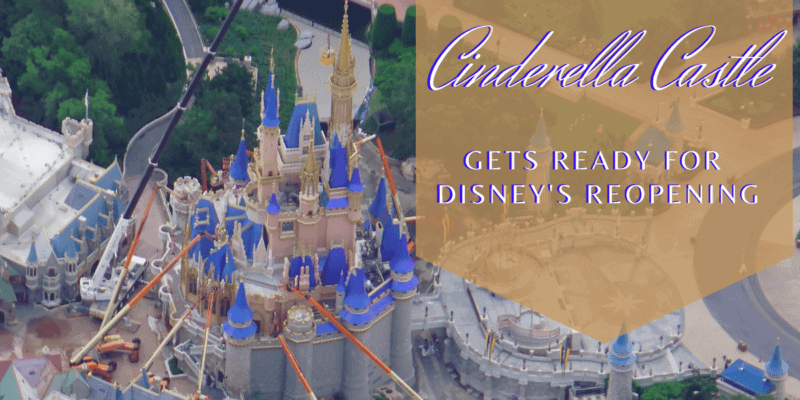 We are just weeks away from the reopening of the most magical place on earth and Disney is getting ready for the big day! Not only have Cast Members started to get called back to work, but it looks as if the beauty herself is getting decked out for her fans; us included!

Check out these amazing aerial photos from @bioreconstruct where you can see the progress of Cinderella Castle’s stunning Rose and Gold makeover.

Aerial view of work in progress on Cinderella Castle. New color scheme for the 50th Anniversary. Likely to be complete when Magic Kingdom reopens next month. pic.twitter.com/0JDMtMsoCV

Aerial view of Cinderella Castle, where work has resumed on new colors for the 50th anniversary. This work likely complete when Magic Kingdom welcomes guests back next month. pic.twitter.com/KYFiCLcnKD

We first heard Cinderella Castle was getting a dazzling new look as the Walt Disney World Resort gears up to celebrate the big Golden 50th anniversary next yEAR!

The Disney Parks Blog shared the announcement and the artist rendering of what the castle will look like when it is completed, and it is absolutely stunning!

Cinderella first transformed into a princess 70 years ago this week when the animated classic was released—and ever since, her courage and kindness have been inspiring guests and cast members alike. We are excited to share that her story has inspired a bold, shimmering and royal makeover of her namesake castle at the heart of Walt Disney World Resort.

Because of the theme park closures, the renovation was put on hold momentarily. However, the work seems to have resumed recently and the progress is moving swiftly and beautifully!

The renovation to Cinderella Castle is just one of the many projects happening at the Walt Disney World Resort as they gear up for their 50th anniversary!

Other projects we’re super excited to experience are the addition of the TRON Lightcycle Power Run attraction in Tomorrowland at Magic Kingdom, and the complete overhaul happening at EPCOT!

What are you most excited about to experience when the parks reopen? Let us know in the comments. We wanna hEAR from you!