When Will Disney Springs AMC Location Reopen? - Inside the Magic 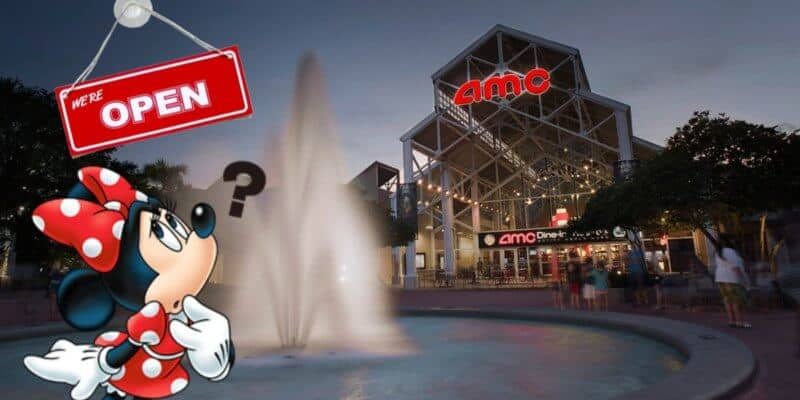 A New York Times reporter has now shared an update that says AMC Theatres nationwide will now require all Guests to wear masks beginning with the reopening on July 15.

Just in: AMC THEATRES LISTENS TO ITS GUESTS AND SCIENTIFIC ADVISORS AND IMMEDIATELY REVERSES COURSE:
AMC WILL REQUIRE ITS GUESTS TO WEAR MASKS AT AMC THEATRES NATIONWIDE, BEGINNING WITH THE JULY 15 REOPENING

Despite almost having to file for bankruptcy, AMC Theaters is making its comeback by announcing its reopening plans!

AMC has just made their official reopening plans for the United States movie theater locations which includes about 450 US locations reopening on July 15. This will be just in time for the highly anticipated Disney live-action film, Mulan, which is set to debut in theaters on July 24.

According to Deadline, AMC will reopen the locations in four phases:

In phase 1 with 30% seating capacity. At all theatres nationwide in non-recliner auditoriums, AMC will automatically block out every other row of seats for every showtime. Phase 2 raises auditorium capacities to 40%, and by Labor Day the chain is looking at 50% auditorium capacity. By Thanksgiving, the plan is for AMC to get to 100% in time for Disney’s Soul and MGM’s No Time to Die.

So how does this affect Disney? In regards to the location at Disney Springs in Orlando, Florida — The official Disney Springs website is still showing they will be closed for July 15. Disney has not yet made a statement on whether or not the Disney Springs location will be reopening but Inside the Magic will continue to update you as we get new information.

And although Downtown Disney in Disneyland Resort no longer as an AMC on the property, there are several locations in the LA area. In regards to when those LA AMC locations will open, Aron stated, “that is up to the Governor and the Mayor, it’s not up to Adam Aron at AMC. We hope that they open early-to-mid-July, but that’s their call.”

Are you excited to see AMC Theaters reopen on July 15? Will you be heading to the movies? Let us know in the comments.

Comments Off on When Will Disney Springs AMC Location Reopen?