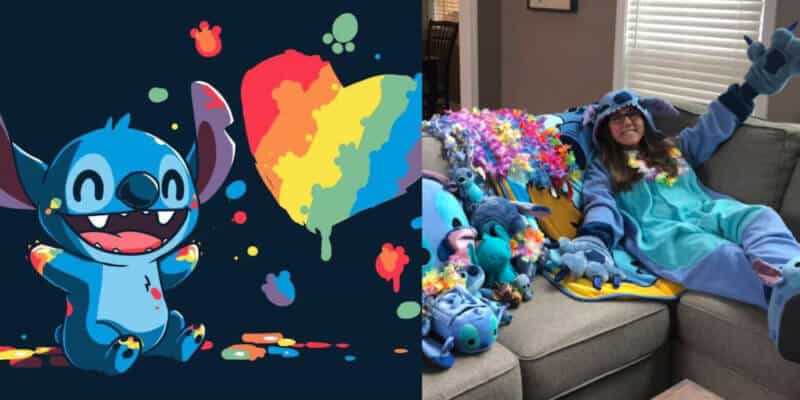 For those who are not familiar with the loveable extraterrestrial, he first graced the screen in 2002 with the premiere of his Disney film starring alongside Lilo. The film follows Stitch, a genetic experiment from outer space, who escapes from his evil creator to Earth. This is where he tries to impersonate a dog and gets adopted by Lilo.

In the beginning, Stitch plans to use her as a human shield to protect him from the aliens sent to recapture him. However, as he spends more time with Lilo, Stitch does a little soul searching and starts looking for a greater purpose in life. The alien also learns the meaning of “love” and “family.”

Below are a few of our favorite social media posts celebrating Stitch!

This first post celebrates both the space fugitive and pride month all in one as it features Stitch painting a rainbow heart with his paws.

This next post takes an iconic moment from Disney’s The Lion King and changes it up by replacing Simba with the “blue king,” as declared by Twitter user Jessica McCartney.

@JennLovesDisney took to Twitter to share her Daughter’s love for Stitch by having her pose with her many pieces of Stitch merchandise! Now this is what you call a real fan!

Other posts online come from Twitter users who shared their own sketches of Stitch, in addition to screenshots of the alien from the film and some images of fans posing with the character on Disney properties!

Fans online weren’t the only ones to celebrate Stitch on his special day. Oh My Disney also shared a post celebrating the alien! In a tweet on their official Twitter account, Oh My Disney shared a series of 626-themed wallpapers that can be used on your mobile device!

Celebrate #626Day with the one and only Experiment 626, Stitch! pic.twitter.com/2yyVBfnJGQ

Which of these social media posts paying homage to Stitch are your favorite? Let us know in the comments!