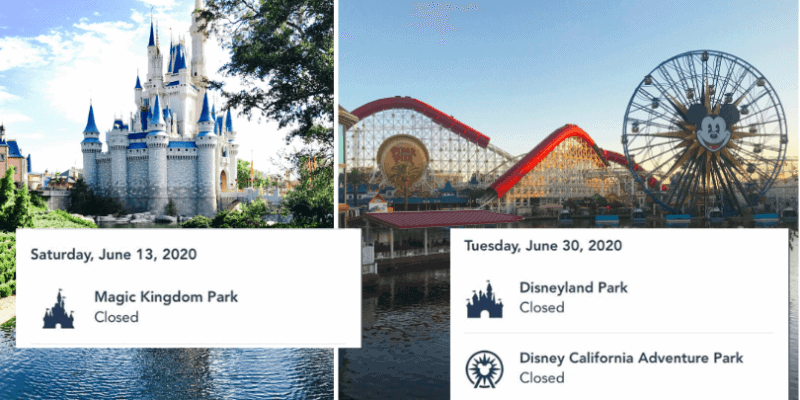 Walt Disney World Resort and Disneyland Resort have further removed their theme park hours into the month of June.

This news comes after both Walt Disney World Resort and Disneyland Resort emailed upcoming June guests encouraging them to postpone their Disney vacations. You can read more here.

The removal of Walt Disney World theme park hours also comes the same week that Disney Springs (Disney World’s shopping, dining, and entertainment district) began its phased reopening. Disney Springs reopened to the public with limited capacity yesterday on May 20, with a select number of restaurants and retail locations (that are not owned or operated by Disney) open, limited parking available, limited hours, and health and safety measures in place.

At the time of this article’s publication, Disney Springs is the only Disney property in the U.S. that is open. The theme parks at Walt Disney World Resort in Orlando, Florida, and at Disneyland Resort in Anaheim, California, remain closed until further notice. (However, Disney is expected to make an announcement about the Disney World park soon.) The resort hotels at Disney World and Disneyland also remain closed until further notice.

Right now, it is unclear when Downtown Disney at Disneyland Resort will open or whether it will begin a phased reopening just like Disney Springs has. For more information about Downtown Disney, click here.

We continue to monitor the temporary closures of the Disney theme parks in the U.S. and we will update Inside the Magic when we have more information.