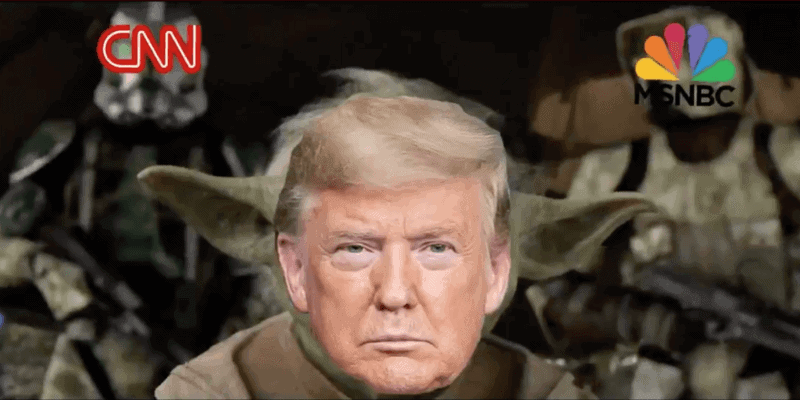 The video begins with what appears to be the Democratic nominee Joe Biden’s face on Emperor Palpatine as he can be seen directing a clone trooper, who’s face is covered with the CNN logo to portray the news company, to execute Order 66 to kill the Jedi (Yoda as Trump).

In the next scene, we see the CNN clone trooper along with a second clone trooper, featuring MSNBC’s logo, approaching Trump as Yoda from behind in what looks to be a sneak attack before Trump performs an aerial stunt with his lightsaber in which he decapitates both troopers.

The new Star Wars-themed video was released on Monday due to the annual Star Wars Day May the 4th.

May The 4th Be With You! pic.twitter.com/TdFY5ojlgN

According to The Hill, neither MSNBC, CNN and the Biden campaign returned requests for comment on the video.

This is not the first campaign video we’ve seen from President Trump depicting himself as one of The Walt Disney Company’s many famous franchised characters.

In December, we saw Trump portrayed as Thanos, one of the biggest villains in Marvel’s history, in a tweet from the same official Trump campaign Twitter account after the House of Representatives introduced two articles of impeachment against the president.

The video featured a shot of Trump superimposed onto the head of Josh Brolin’s character, which he depicted in both of Marvel’s record-breaking films Avengers: Endgame and Avengers: Infinity War.

At the time, similar to most political topics, the tweet gained a mass amounts of discussion on Twitter with many pointing to the fact that President Trump compared himself to a villain who had killed millions in the Marvel films.

What are your thoughts on this campaign video? Let us know in the comments!