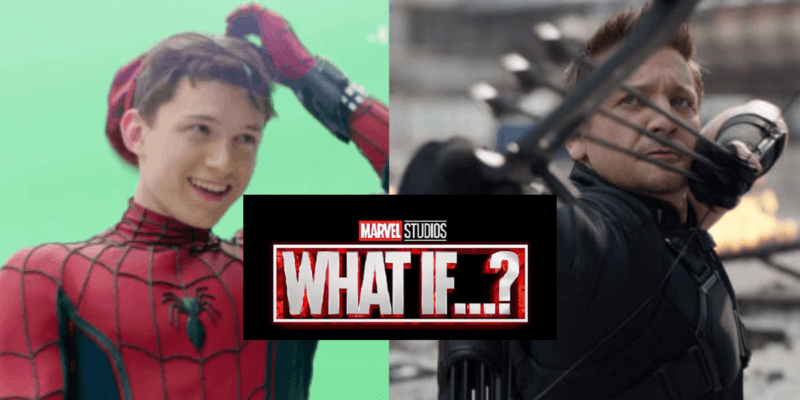 Marvel‘s What If? is set to take the MCU to unchartered territory when it launches on Disney Plus in 2021. We know that the show will tackle various multiverse stories like Peggy Carter (again played by Haley Atwell) taking the Captain America super serum to become Captain Britain and T’Challa donning the mantle of not Black Panther, but Star Lord.

So the idea of a Marvel character becoming someone else is by no means out of the question in this show. However, one Twitter user now thinks that another episode of the animated series may have been inadvertently leaked within its own teaser trailer.

This user claims that an existing Marvel Cinematic Universe movie actor can be spotted dressed as Jeremy Renner’s Hawkeye!

Marvel‘s What If? reveals Tom Holland’s Peter Parker as Hawkeye?

Tom Holland's Peter Parker as Hawkeye in What If…?! pic.twitter.com/G2AumbpiTN

It’s hard to say for sure, but the image does bear some resemblance to Tom Holland’s Peter Parker. In terms of stories that take the Marvel films‘ lore in a different direction, recasting the Spider-Man we all know and love as Hawkeye (even for just one episode) is pretty radical.

As a reminder, the upcoming animated series sets out to explore the Marvel Universe as it could’ve been, had things gone in a slightly different direction;

‘Exploring pivotal moments from the Marvel Cinematic Universe and turning them on their head, leading the audience into uncharted territory.’ – What If? Imdb page.

Having Tom Holland’s Peter Parker in the animated series potentially raises a few issues. The character is famously owned by Sony and each Disney Marvel movie or tv series that the character appears in must be carefully agreed in advance.

As for whether Holland playing a different character in a Marvel Studios owned Disney Plus series, be it Hawkeye, The Winter Soldier, or anyone else is acceptable within the current agreement; we just don’t know.

Alternatively, perhaps it’s a nothing but a red herring, and Spidey is merely in cosplay as his fellow avenger. Or, it could just be an animated, blurry Jeremy Renner, and this is all nonsense.

Whatever the case, it’s an exciting prospect for Marvel fans who want to see different takes on their favorite characters. Other anticipated What if? stories that myself and many other fans would love to see include ‘what if Thanos snapped the other half of the universe?’ and an MCU take on the infamous ‘Marvel Zombies’ miniseries.

One thing’s for sure though; Marvel’s What if? is certainly not going to be without surprises.

What do you think about this image? Could Tom Holland’s Peter Parker become Hawkeye in the What if? animated series? Let us know in the comments below.