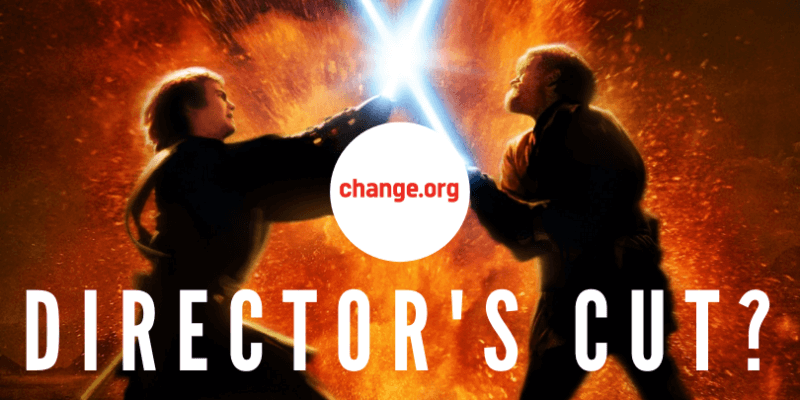 With talk of Anakin Skywalker actor Hayden Christensen joining the Obi-Wan Kenobi Disney Plus series and Natalie Portman returning to the series in some capacity, the Star Wars prequel trilogy is on every fan’s mind right now.

One such fan has taken their love of the first three Skywalker Saga movies to the next level, by creating a petition to release a director’s cut of the third film, Episode III: Revenge of the Sith.

You can find the petition over on change.org right here. At the time of writing, it currently has just over 17,000 signatures. Its description reads as follows:

Hello there! The original Star Wars: Revenge of The Sith (2005) cut was over four hours long, and we think that George Lucas should do the right thing and give the fans what we deserve and what is rightfully ours. We love democracy, and we hope he does too. By signing this you are letting your voices be heard. If this petition does go viral, then we will have unlimited power and if George does the right thing then he would be strong and wise and we would all be very proud of him. This whole operation is our idea and we need to ensure that it is done. We will proclaim ah, victory when we achieve our goal. May the force be with you all and have faith.

Apart from the petition consisting of a collection of dated Star Wars memes, there is in fact no information to suggest that a 4-hour director’s cut of Revenge of the Sith even exists, aside from the standard assembly cut that all films have before editing.

While a handful of deleted scenes from all of the prequel trilogy films are available, it’s unclear why this Star Wars fan is so devoted to seeing an Episode III with each deleted scene included.

The language used is also quite something. ‘George Lucas should do the right thing‘? ‘What the fans deserve?’ Come on now.

Star Wars Episode III: Revenge of the Sith is almost universally renowned as the best movie from the Star Wars prequel trilogy.

Perhaps this petition came about in response to the Justice League Snyder Cut which was just recently announced. After a huge DC fan outcry, Zack Snyder’s Justice League (which is allegedly vastly different to the movie we got) will release on HBO Max in 2021 according to The Emory Wheel.

Perhaps this Star Wars fan wants to see something similar from Lucasfilm, though unlike the Snyder Cut, there’s no indication that the version of Revenge of the Sith that we got was altered before release. George Lucas seemed pretty satisfied with the prequel trilogy despite some fan heat at the time, so there seems to be no good reason to demand a new Revenge of the Sith cut.

It’s also worth mentioning that Lucas sold all rights and creative control of Star Wars to Disney when it bought Lucasfilm in 2012. So if these fans want to see a Revenge of the Sith cut, or a new release of The Phantom Menace, Attack of the Clones, or any other Star Wars movie, they’re going to have to convince Disney.

What do you think about this Star Wars petition? Will you be signing it? Let us know in the comments below.