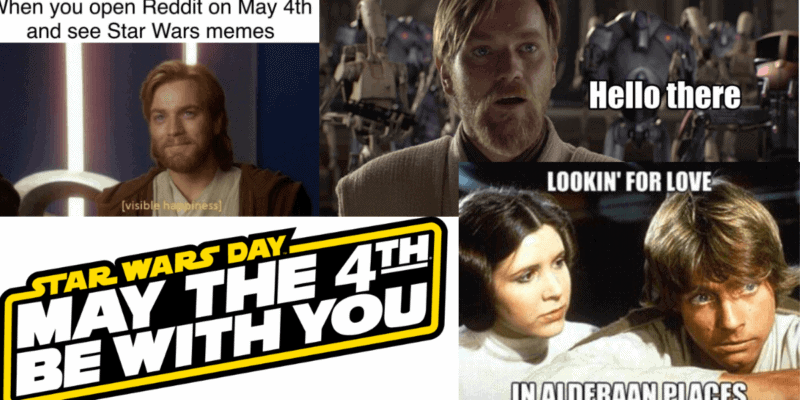 Disney and Lucasfilm are churning out some amazing Star Wars related content, including a Baby Yoda themed Monopoly game and a free Star Wars eBook to mark the day.

However, we at Inside the Magic think there’s no better way to celebrate May the 4th and the Star Wars franchise than with some top-quality Star Wars memes!

Whether you’re a fan of the original trilogy, the prequels, or you love all of the Skywalker saga, there’s something here for everyone.

DISCLAIMER: Please note that while the Star Wars memes we are sharing here are family-friendly, some of the pages that we credit may contain Star Wars memes that may not be, so please proceed with caution.

With that said, let’s geek-out and take a trip to the dark side with some of the most hilarious Star Wars-themed memes available.

This one is really dumb but it had me giggling for far too long. When it comes to Star Wars memes, no film is more popular than Revenge of the Sith, so expect to see a lot of that in here.

The final movie from the most underrated trilogy is certainly the best for a pop culture-focused meme or joke!

I feel this one on a deep, spiritual level. No matter what you think about controversial movies like The Last Jedi or The Phantom Menace, we can all agree that Williams’ score makes anyone feel like a Jedi Knight.

Darth Vader puts us all to shame with his excellent social distancing. Let’s hope the Sith lord only starts a Star War and not a meme war. In terms of a parody of our crazy modern world, I can’t think of a better May the 4th meme! Don’t mess with the dark side though. This Sith lord finds your lack of faith disturbing.

I’ve always loved Count Dooku and the prequel trilogy. But what is with that curved lightsaber? I believe it’s an homage to a different style of fighting, but I’ve always found it so awesome and distinct. This funny Star Wars meme agrees and was clearly made by a Star Wars fan who loved Christopher Lee’s performance.

To each would-be Luke Skywalker and Princess Leia, we wish you a magical Star Wars Day. And a big thank you to Disney and Lucasfilm for the constant stream of awesome content. May the force be with all of you, always!

What do you think of these Star Wars memes? Which Star Wars movie is best? Do you prefer Empire Strikes Back or a New Hope? Or perhaps The Force Awakens? Let us know in the comments below.

Comments Off on Hello There! The Force is Strong With These Star Wars Memes