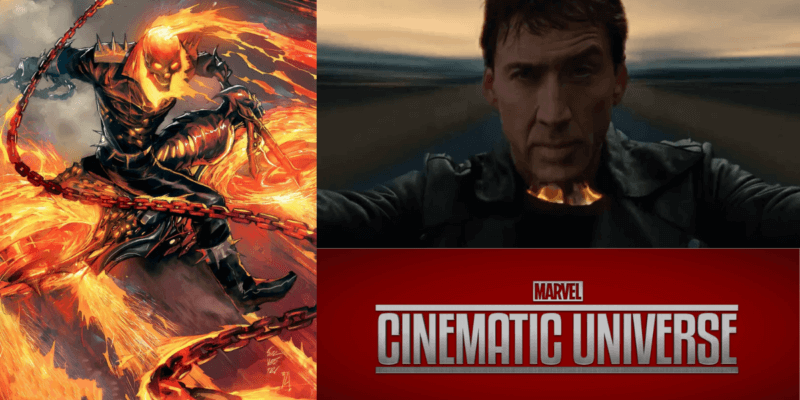 Ghost Rider, the sometimes antihero – sometimes superhero of Marvel comics is set to return to our screens as part of the Marvel Cinematic Universe.

An exclusive report by MCU Direct alleges that a new Ghost Rider film or tv show is being worked on by Kevin Feige and Marvel Studios right now.

It’s currently unknown whether this Ghost Rider will be Johnny Blaze, Danny Ketch, or any other version, but the report states that there’s one Ghost Rider that it definitely isn’t.

Robbie Reyes has already made his mark at the MCU’s Ghost Rider in the tv show Marvel’s Agents of Shield. Gabriel Luna did such a great job that his Ghost Rider was supposedly getting his own spinoff Hulu series, but that project was later canned.

While nothing is confirmed, whether its a Marvel television show or a full-on Marvel Cinematic Universe movie, it seems likely that Johnny Blaze would be the Ghost to ride into the Marvel Studios‘ series.

Rumor has it that the Johnny Blaze version may indeed be the Ghost Rider to ride into the Marvel series, and that gives me mixed feelings. On the one hand, it’s great to redeem the interpretation of Johnny Blaze’s Ghost Rider that has already been put to film, but it also feels a little superfluous when Marvel television has already created such a great Ghost Rider.

When could Ghost Rider make his solo Marvel debut?

Well, his Marvel Cinematic Universe movie debut. I know we’d all rather forget, but Ghost Rider has already appeared in a feature-length Marvel movie, played by Nicolas Cage. This was also followed by Ghost Rider: Spirit of Vengeance. They are both regularly ridiculed by the Marvel fan base as examples of poor character adaptation, with the name and the flaming skull being two of the few elements that the movie gets right.

Anyway, as for when this new Ghost Rider will join Marvel Studios, that’s up to the magic wisdom of Kevin Feige and company.

One bet is that Ghost Rider might actually make an appearance sooner rather than later, in another upcoming Marvel movie.

Doctor Strange in the Multiverse of Madness co-starring Ghost Rider?

This is just a rumor, but Doctor Strange‘s sequel is certainly playing up its horror-inspired script. It is not only to be directed by horror legend Sam Raimi, but is strongly rumored to feature Nightmare as its main villain, a comic book antagonist to both the magic superhero and Ghost Rider himself.

Still, all of this is just according to the report from MCU direct, and the details are yet to be confirmed. Johnny Blaze is still not confirmed, and talk of a female Ghost Rider has also been prevalent.

Personally I’m excited about a new Ghost Rider property, whether that be a tv show or a film. My only hope is that the Robbie Reyes version is also incorporated in some way. Gabriel Luna is an excellent actor who deserves more screen time as Ghost Rider. Make it happen, Marvel!

What do you think about this Ghost Rider news? Would you prefer a Ghost Rider series or a new MCU movie? Should he appear in Doctor Strange 2? And should it be the Johnny Blaze version or the Robbie Reyes version? Or should we see the first female Ghost Rider? Whatever you think, let us know.

Comments Off on New Marvel Ghost Rider Project In The Works