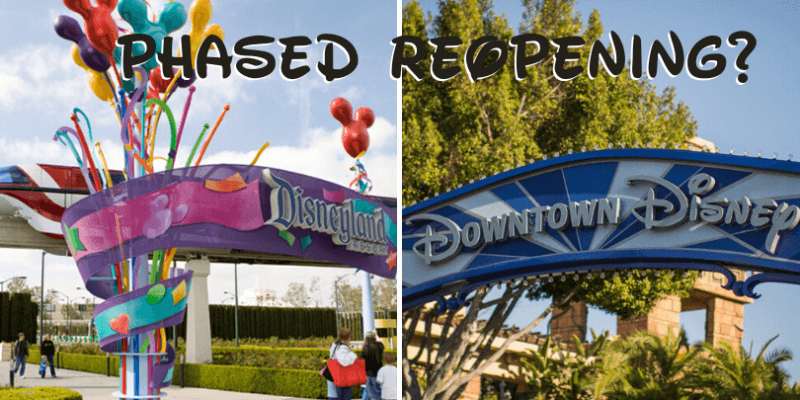 Restaurants, malls, and more are now allowed to begin to reopen in Orange County, California, indicating that a phased reopening could be coming soon for Downtown Disney at Disneyland Resort.

Dining inside restaurants and shopping at malls in Orange County are now allowed as of Saturday, May 23, thanks to California Governor Gavin Newsom‘s approval. OC Register reports that Newsom’s administration approved Orange County’s plan expedite the latter phase of California’s Stage 2 of gradual reopening. This means that restaurants and stores can reopen with in-person dining and shopping, as long as they continue to keep health and safety protocols in place for guest and staff safety.

“The County of Orange has met the State’s latest metrics to remove its restrictions on the re-opening of more businesses,” said Board of Supervisors Chairwoman Michelle Steel, Second District in a news release. “Orange County issued guidelines for businesses to operate three weeks ago. With this attestation, it is our goal to ensure all Orange County businesses have the confidence to open as safely and as soon as possible without concerns about the state order.”

The reopening announcement also came with the mandate for all people to wear face masks when in public.

This new development (which was announced at the beginning of Memorial Day weekend) signals something pretty big for Disney fans. Disneyland Resort (located in Anaheim, Orange County, California) is also the home of Downtown Disney. And under the fully-embraced Stage 2 in Orange County, the Disneyland shopping, dining, and entertainment district could possibly be reopening soon.

Florida Governor Ron DeSantis stated at the beginning of this month that restaurants in the state of Florida would be allowed to reopen with restrictions starting May 4. On May 7, The Walt Disney Company officially announced that Disney Springs at Walt Disney World Resort would begin a phased reopening two weeks later on May 20.

If Disneyland Resort in California were to follow the lead of Walt Disney World Resort in Florida, then that may mean that an announcement of a phased reopening of Downtown Disney (with limited capacity and health and safety protocol strictly in place) could be coming very soon.

So, what could a phased reopening of Downtown Disney at Disneyland Resort look like? Disney Springs started by reopening restaurants and shops that were not owned or operated by Disney. And next week, those owned by Disney will start to reopen. Here is a list of all of the restaurants and shops at Downtown Disney in California that we may see begin to reopen if a phased reopening were to begin in the coming weeks (keep in mind — Disney has not yet announced this):

For more information on changes coming to Disneyland Resort after reopening, click here.

We will stay up to date with the latest information about Disneyland Resort’s temporary closure. For now, Disneyland Resort (including the Disneyland and Disney California Adventure theme parks, Downtown Disney, and the three on-site hotels) remain temporarily closed until further notice. If anything changes, we will update Inside the Magic.