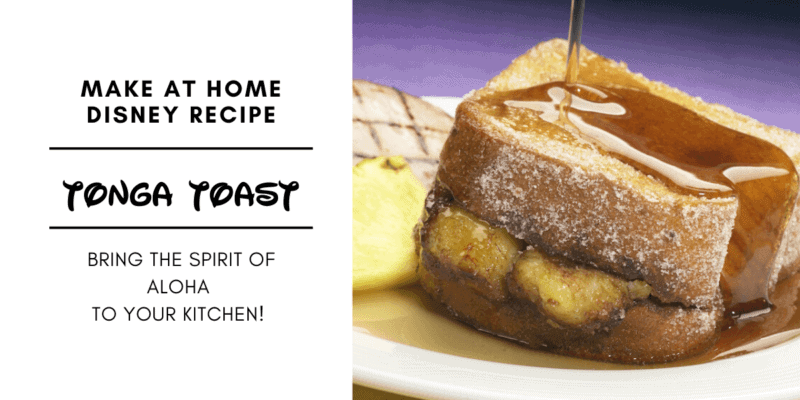 Disney Parks and Resorts has just released another recipe for one of their iconic dishes. This time, it’s the famous Tonga Toast from Disney’s Polynesian Village Resort in Walt Disney World.

If you prefer to read as you go instead of following a video, here’s the official recipe as it was shared by Disney Parks and Resorts:

Mix sugar and cinnamon in medium bowl (large enough to roll toast) with a fork until thoroughly blended.  Set aside.

Note: This recipe has been converted from a larger quantity in the restaurant kitchens. The flavor profile may vary from the restaurant’s version. As a reminder, while preparing this recipe, please supervise children who are helping or nearby.

This special breakfast has been served at the Polynesian since it opened along with the Magic Kingdom, Disney’s Contemporary Resort and Disney’s Grand Floridian Resort and Spa back in 1971. It can help make any day a Disney day and provide some of that special Disney Magic and Spirit of Aloha to get you through the day.

Try this Disney Recipe next: Recreate Ohana’s Bread Pudding In Your Own Kitchen