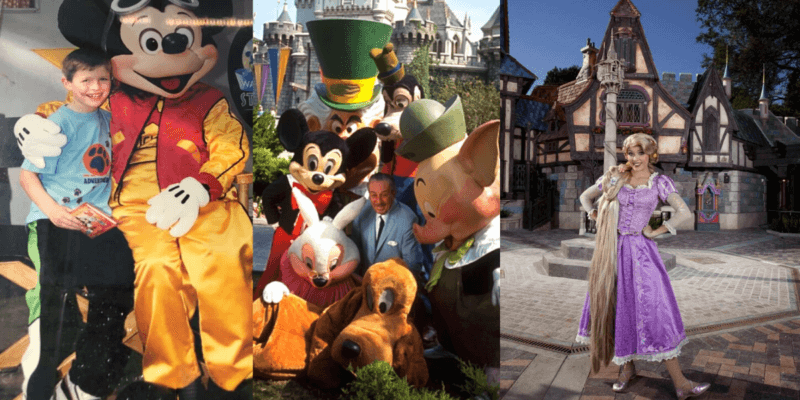 You might have seen the Disney resorts challenging each other to share their first Disney character memory.

From the below post from Disneyland Paris showing Mickey overlooking the building site that was destined to become France’s Disneyland park, to Shanghai Disneyland Resort sharing a beautiful snap from opening day, each Disney memory is instant magic. It almost makes me feel like I’m back at The Magic Kingdom.

What is your first memory of a Disney character?

Your first Disney vacation is a very special time for a kid. If I could wipe my brain of all things theme park and Disney related and do it all over again, you bet I would.

As is, I met my first Disney character at Disneyland Paris (then known as Eurodisney) in 1999 when phones were still phones, Disney didn’t own Star Wars or Marvel, and amateur Disney photographers like me could still readily snap pictures of the Disney characters as they walked around the park.

Now, granted this picture isn’t a good example as I’m pretty sure it’s at a static Disney character meet and greet, but we take what we can get. And of course, who else could my first Disney character be but Mickey Mouse himself.

What age were you when you met your first Disney character?

Cliché though it may be, the Walt Disney mascot was my first character experience, aged 5. What age were you guys? Were you a kid like me, or did you experience your first Disney park when you were an adult?

Who is your favorite roaming Disney Parks character?

I’ve got to say I have a lot of love for the Star Wars characters of Disney‘s Galaxy’s Edge. Emo though he may be, Kylo Ren is a joy to interact with. Here he is threatening to end my life with the force during my Walt Disney World vacation.

It was tough getting that magic shot as he seemed to be taking my trip a lot more seriously than me.

Still, along with Mickey, I can now class Kylo as one of my beloved Disney pals.

Tell us about your favorite Disney Parks character

So that’s my Disney account of my first Disney character experience.

While the parks are sadly closed, we want to hear your Disney character memories below. We love hearing about each magical moment that our readers have experienced while at their favorite Disney park.

Whether you took a ride with Rapunzel, had a cute crush on the Little Mermaid as a kid, or simply cried at that sweet Disney magic when meeting your favorite Disney character, we want to hear about it. Alternatively, if you want to share a ride photo or attraction photo, that’s cool too! Let’s just keep the Disney photos coming and the magic vibes will sort themselves out.

Stay positive Disney fans. We’ll be taking a trip back to our favorite Disney park before you know it.