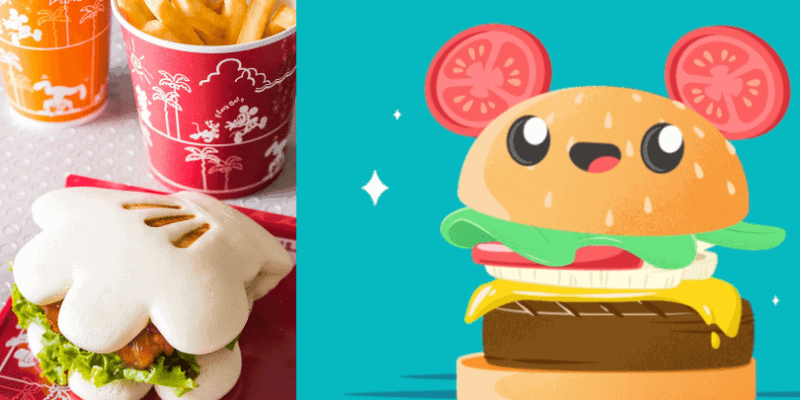 It is National Burger Day here in the United States, which prompted Disney Parks Blog to share with us some of the most popular Disney burgers from the Disney Resorts around the world!  These delicious dishes look so mouth watering that we couldn’t help but share them with you.  How many of these Disney burgers have you tried so far?

Let’s start with the OG, Disneyland Resort in Anaheim, CA.  The United States is known for our great burgers, but which one takes the cake at Disneyland.  Would you head to Disneyland Park or Disney California Adventure for your favorite burger?  Well, Disney Parks Blog released the recipe for Hawaiian Cheese Burger and green papaya slaw from Tangaroa Terrace at the Disneyland Hotel. I’ll be heading to the grocery store to pick up all the ingredients for this recipe!

You have four parks — Magic Kingdom, Disney’s Hollywood Studios, Disney’s Animal Kingdom, and EPCOT — to choose from at Walt Disney World.  Which Disney Park do you want to go to for a burger?  How could you turn down the Mickey Burger at Cosmic Ray’s Starlight Café comes with macaroni and cheese, American cheese, cheese sauce, flaming hot cheese dust, and bacon served on a Mickey Mouse bun.

How about channeling your inner dark side with this one?  The Dark Side Burger wowed guests as part of the offering during the Star Wars Season “Legends of the Force – A Star Wars Celebration.”  This theme park burger will make you hope that you have the force with you to not be in a food coma after!

As we wait for Avengers Campus to open up at Disneyland Resort in Anaheim, we wonder if this burger from Shanghai Disneyland will make an appearance when it does open.  Not only does this Avengers Wagyu Beef burger with a photo-worthy red bun look super tasty, but it’s theme is right on point.  It really would be a perfect addition to the menu.

The Japanese word for cute is kawaii.  Japan has always been know for their adorably designed food items.  So when you blend both the Japanese culture and Disney together, you get Tokyo Disneyland’s burgers which are the most kawaii of all the parks!  And for this final park, we couldn’t pick just one, but both the unique Mickey Mouse Glove Burger and Mickey-shaped Rice Ball, called Onigiri, sandwich.

We’re drooling over these burgers, and you can see more of them over on the Disney Parks Blog.  So when you’re planning your next Disney dining, be sure to leave dining reservations in your belly for a delicious burger and french fries.  When you prepare your Disney Dining Plan, you’ll see that there’s burger menu items for everyone, even an impossible burger, if you’re vegan.  You can always dine in or do mobile ordering!