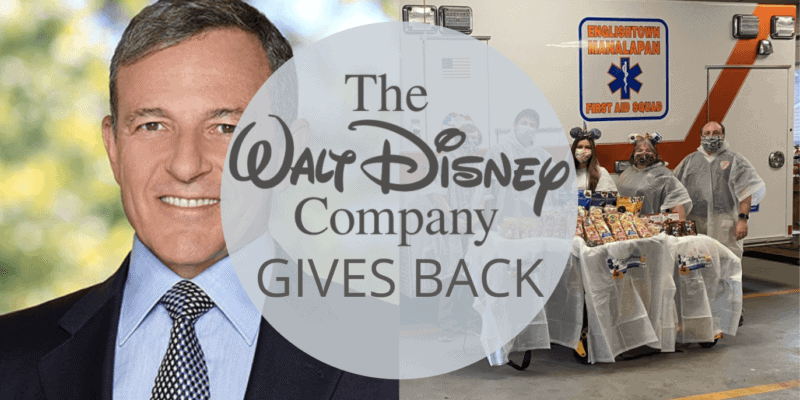 We love to see Disney doing good! On April 29, Tracie Cuccia, Chief of the Englishtown Manalapan First Aid Squad in New Jersey, took to Twitter to ask The Walt Disney Company’s executive chairman Bob Iger if it would be possible to receive a donation from the House of Mouse.

@RobertIger I am the Chief of the Englishtown Manalapan First Aid Squad and also a huge Disney fan. Is there anyway you could send us some ponchos to use on calls or snacks for the crews to eat between 911 calls. Thank you!

Iger responded on social media within 20 minutes, presumably to the surprise of Cuccia and the rest of the First Aid team. At that time, of course, the EMS squad had no way of knowing if the Bob Iger Twitter donation would actually happen.

I'll work on it! Best to you and the squad!

Yesterday, Cuccia posted an update about the Disney donation, tweeting at Iger, “We are blown away by the generous donation from you and The Walt Disney Company!! From all the members, thank you so much!!”

We are blown away by the generous donation from you and The Walt Disney Company!! From all the members, thank you so much!! pic.twitter.com/tnFhHmKO0R

Cuccia shared a photo that shows a table decorated with a Mickey tablecloth and decked out with Disney snacks. We spy Chip and Dale Mickey pretzels and Main Street Popcorn Company popcorn bags…just like being in the Disney Parks!

The English-Manalapan first responders are decked out in Disney gear, including Minnie Ears and Disney motif face masks. We love this heartwarming story and we’re thrilled to see Iger follow through on his Twitter response!

This isn’t the first time we’ve seen the Disney family of companies making a charitable donation recently. Cast Members and executives have been taking steps to provide for communities around the United States and around the globe.

Just yesterday, Disney World donated fabric to the Orlando Ballet so their crew can make face masks for members of the local Central Florida community.

The Walt Disney Company has also made numerous donations of N95 masks, ponchos, and other supplies to healthcare organizations around the globe, ensuring that at-risk medical workers have the gear they need during these challenging times.

Tell us what you think about this awesome Disney donation in the comments!