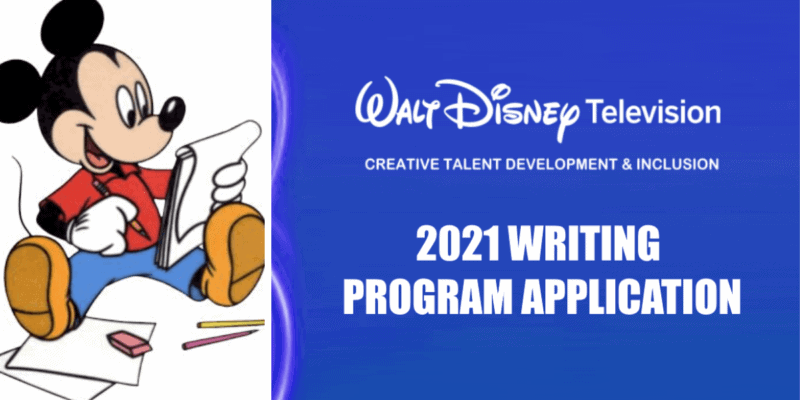 Did you ever have a moment as a kid watching DuckTales, Goof Troop, Gargoyles, The Suite Life of Zach & Cody, Phineas and Ferb, and Gravity Falls or whichever Disney Channel Show was your favorite and thought: “I could totally write a Disney Channel show”? Well, now’s your chance to prove it!

It has just been announced that the 2021 Walt Disney Television Writing Program will begin accepting applications in less than one month.

HEADS UP: The 2021 Walt Disney Television Writing Program application will go live on May 4, 2020.

In advance, we are happy to share our application instructions and FAQs so you can get prepared and familiarize yourself with any changes to this year’s process. The deadline will be June 5, 2020.
1) Read the Application Instructions: http://bit.ly/wdt-wpinstructions-2021
2) Read the FAQs: http://bit.ly/wdt-wpfaqs-2021
3). Stand by for the May 4 release of the application (at which time Exhibits A and B will also be made available)

All updates will be posted on this Facebook page, so stay tuned here!

But you won’t just get the chance to write for Disney Channel. The Walt Disney Company has a vast reach across multiple channels and genres of television, including ABC, Fox, National Geographic, and more. And the Walt Disney Television Writing Program is your foot in the door to that world and the opportunities it provides.
According to Walt Disney Television’s website,

For over 25 years, the Walt Disney Television Writing Program has been lauded as one of the most successful writer programs in the entertainment industry. The one-year program is the only program of its kind designed under terms approved by the Writers Guild of America, West (WGAW). The program has launched the careers of many writers, including: Maria Jacquemetton (Mad Men); Jane Espenson (Once Upon A Time); Saladin K. Patterson (Psych); Bryan Oh (Chicago Fire); George Mastras (Breaking Bad); and Veena Sud (The Killing).

Created in 1990 in partnership with the WGAW, the Walt Disney Television Writing Program is based in Los Angeles and is widely recognized as one of the entertainment industry’s most coveted writing programs.

Remember the applications go live on May 4. Good luck and May the fourth be with you.