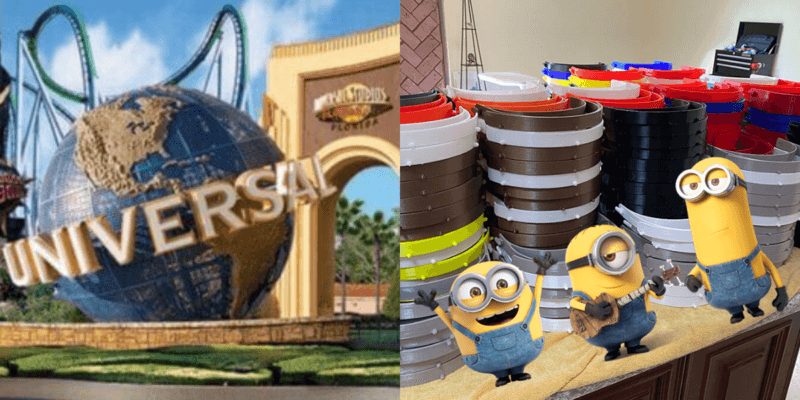 It has been said time and time again that ground-breaking theme parks at Walt Disney World and Universal Studios do more than just entertain guests, and Universal Orlando proved that fact once again.

Since shortly after temporarily closing its gates in mid-March, Universal Orlando Resort and its Team Members have been hard at work, using their 3-D printers to mass-produce face shields for the healthcare workers on the front lines against the enduring pandemic.

According to Universal, the project began on March 28 when Jessica Harned, supervisor of advanced resort technology in the parks technology department, asked her boss a very straight forward question: “What do you think of us 3D printing face-shields to donate to our local medical facilities?”

Taking advantage of three printers–which are normally used to make things like prototypes of Volcano Bay’s Tapu Tapu wristbands–Universal has been able to create and donate 1,300 face mask shields so far. And they have no plans on stopping.

The face shields made by Jessica and her team using Universal’s printers are being delivered to AdventHealth Nicholson Center. They are considered some of the most important pieces of protective equipment required by healthcare workers.

“The biggest way that [the disease] is spread is through droplets,” said Scott Bond, the senior director of the innovation lab for the AdventHealth Nicholson Center. “In order to protect our workforce, our clinical teams — and even non-clinical teams, we have people that are screening at the front doors — they need protection. While the N95 masks are extremely vital and important, they don’t protect the eyes or fully seal the nose. So if a patient coughs or sneezes, we need these shields to protect the entire face.”

When Jessica first decided to take on the project, she first had to see if her printers could do the job. They make the headbands themselves.

“I was seeing a couple things around the makerspace of people helping out and I just thought ‘I could do that,’” Jessica explains. “‘I’m home and I have a printer and I can maybe grab two more from the office, and try to print some of these masks.’”

She found an open-source headband design online and went to work, reaching out to medical professionals like Scott. And she explained the process of 3-D printing as such.

“Typical extrusion 3D printers are taking a thread of plastic filament, heating it up, and laying it out on the print surface one layer at a time,” she says. “If you think of a 3-dimensional grid with an X, Y, and Z axis, the printer is reading a series of  X,Y,Z coordinates as it prints an object layer by layer…Anything that you need that is plastic, I can probably make.”

But while face shield bands are just one of many applications for 3-D printing, the printing itself is unfortunately still very slow.

The need that Universal is trying to meet for AdventHealth calls for 20,000 medical face shields. Universal states that if they are printing continuously, the printers can turn out 40 headbands a day. But that has not dampened Jessica’s spirits at all.

“This is where it goes way beyond me,” she says. “I just started the ball rolling. Before any of this, I had already formed this unofficial 3D printing co-op with colleagues who I knew were 3D printing on property. We have people from parks technology, creative, entertainment tech, the creative prop and modeling shop, and merchandise…we’ve got people from all over our parks who are motivated together around this common goal.”