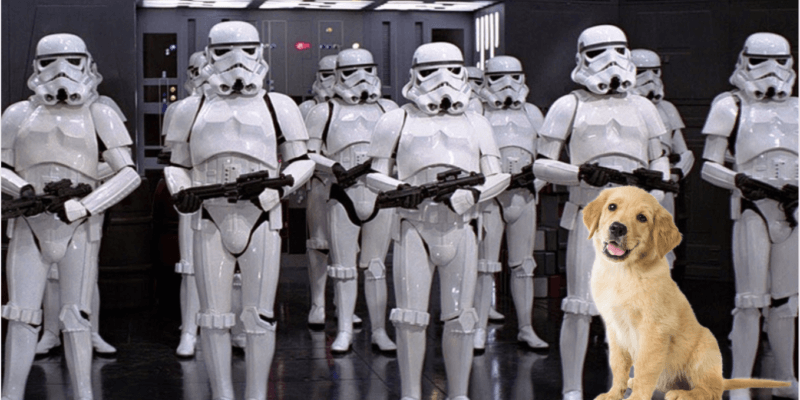 The current pandemic is affecting people around the world and, sometimes, the best way to deal with a bad situation is a little bit of humor…or a trip to the Dark Side of The Force…or a combination of the two.

In England, this dog owner decided to casually take his canine companion for a walk while wearing a Storm Trooper costume. You can bet that no germs are getting past that mask.

While we can’t know for sure if the “Storm Trooper” was looking for laughs or genuinely concerned about the global pandemic (Yoda did say that “Fear is the path to the Dark Side”), this photo definitely puts a smile on our faces at Inside the Magic!

The juxtaposition of the intense (and impressive) Storm Trooper uniform and the tiny pooch is undeniably amusing, whatever the Trooper dog walker’s intentions originally were.

Journey to a galaxy far, far away…

With most families around the world self-quarantining or under local shelter-in-place orders, there’s no better time to catch up on Star Wars films and news. Disney/Lucasfilm gave Star Wars Episode IX: The Rise of Skywalker an early digital release so you can catch Rey, Finn, and Poe in their fight against the First Order anytime.

If you’re more of a Star Wars TV buff, there have been recent updates about multiple streaming series that take place in the Star Wars universe. The Mandalorian Season 2 has wrapped filming and is still set to release in October 2020. This is welcome news for fans who can’t get enough Baby Yoda and Mando, as most films and television shows had to stop production amid the current worldwide health concerns.

In addition, the upcoming Obi-Wan Kenobi Disney+ series has gotten a new writer and a new title, Pilgrim. While details about when filming will officially begin are unknown at this time, it seems likely that the cast and crew could convene this summer.

What do you think about the English Storm Trooper dog walker? Tell us in the comments!

Comments Off on Rise of the First Order: Check Out This Storm Trooper Dog Walker!