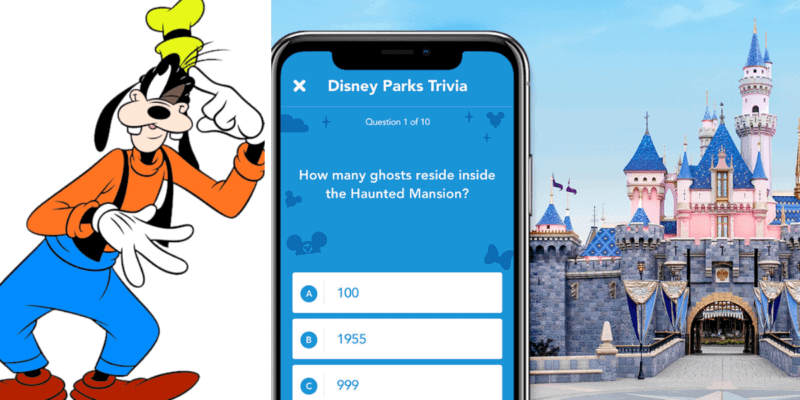 There is arguably never been a better time to prepare for our next trip back to the Disney Parks then right now. By that, I mean beef up your Disney trivia, learn all of the lyrics to your favorite Disney songs, and more.

Disney Parks has recognized that Disney fans love to bring the magic of Disney into their own homes. So, they have brought some of the games and music–usually reserved for those already on their Disneyland or Walt Disney World vacation–to all of the would-be guests at home.

According to Disney Parks:

You can test your knowledge with Disney trivia throughout the Disneyland Resort and Walt Disney World Resort game boards in the app, or even try your hand at Mickey & Minnie’s Trivia Time – Mouse Rules Apply!, a new trivia game, inspired by the new Mickey & Minnie’s Runaway Railway attraction at Disney’s Hollywood Studios celebrating the zany world of “Mickey Mouse” cartoon shorts. You can also explore specially-themedDisney Parks playlists through Apple Music®*. Whether you’re listening to tunes themed to Cars Land at Disney California Adventure park, tracks from EPCOT’s World Showcase, or even the Disney Parks Hits playlist there are many delightful playlists to enjoy.

Related: Missing The Disney Parks? Bring The Family Together With These Disney Games!

Play Disney Parks is a relatively new app that uses your location and Disney account to provide interactive games reserved for different areas of the theme parks to help increase your level of immersion and help you pass the time waiting in line. But now the games are coming home. Along with the new Disney Trivia games and apple music playlists, you will also now be able to play some park-exclusive games at home as well. Most notably, Andy’s Board Game Blast from the Slinky Dog Dash roller coaster at Disney’s Hollywood Studios’ Toy Story Land.

Please note that while you may be able to access some games like those found in Star Wars Galaxy’s Edge, the interactive nature of the game to the surrounding land will limit playability from home.

These games are just the latest way Disney Parks and Resorts has worked to bring the magic to the home of every Disney fan. Through the #DisneyMagicMoments social media campaign, Disney has provided guests official videos of shows, and attractions at the Disney parks, as well as special messages from Cast Members, the recipes for your favorite park snacks, and more.

Related: Disney Releases Series of Park Shows and Ride-Throughs for Fans While Parks are Closed

What are some of your favorite games on the Play Disney Parks app? Have you been practicing your Disney karaoke during this time? Let us know in the comments!