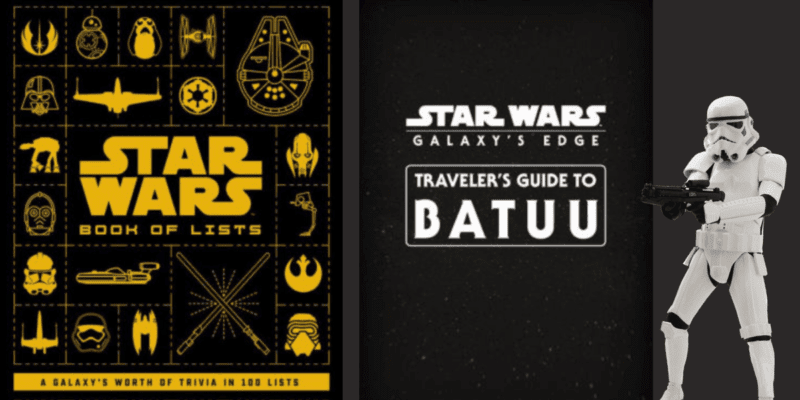 If you would classify yourself as a major Star Wars fan, then you’re going to want to add these two new books to your summer reading list!

The books are titled, Star Wars Galaxy’s Edge: Traveler’s Guide to Batuu and Star Wars: Book of Lists: 100 Lists Compiling a Galaxy’s Worth of Trivia. Cole Horton’s latest Star Wars reads, both expected to arrive in stores on June 23rd of this year, will send you soaring through the galaxy.

The two books are currently available online for pre-order by clicking the title headings below.

Star Wars: Book of Lists: 100 Lists Compiling a Galaxy’s Worth of Trivia

Star Wars: The Book of Lists takes a fascinating look at the galaxy far, far away through trivia culled from both on-screen and off over the history of the franchise. More than a simple accounting of fan-favorite characters or biggest opening weekends, this book is a compendium of the most compelling facts about the saga and fandom summarized in 100 lists.

Find out these fun facts and more with comprehensive lists covering everything you’d want to know about the characters, creatures, ships, planets, and more:

Compiling a galaxy’s worth of trivia and information about the Star Wars Universe, Star Wars: The Book of Lists is an entertainingly accessible trivia format for both hardcore fans and casual viewers.

Set your course for the edge of the galaxy to the planet Batuu where you’ll be immersed in the alluring offerings of a mysterious outpost and thriving port that is a haven for scoundrels, rogues and smugglers.

Upon arrival, you will have access to an authentic, in-world environment unlike anything you have ever experienced before! This official guide to Batuu is written completely in-world, as if you are a visitor from another part of the galaxy looking for recommendations on where to eat, shop, and sightsee while on your trip to this exciting location.

Whether living your adventure in Star Wars: Galaxy’s Edge or simply being an armchair traveler, this in-depth literary companion will delight any fan of Star Wars.

Cole Horton is an author and historian who graduated from Indiana University with a degree in History. He’s worked as a historian and online contributor with Starwars.com, Marvel.com and Marvel AR — an augmented reality app that allows users to scan their comics for extended content.

He has released countless Star Wars books, some of the most popular being Star Wars: Absolutely Everything You Need to Know, Updated and Expanded and Star Wars: The Visual Encyclopedia. He currently works professionally at EA, an american video game company, making Star Wars games. This guy is a true and committed fan!

I don’t know about you, but as a huge Star Wars fan and lover of all things Disney, I feel like I’ll need to add both to my Disney reading collection. I especially want to read this guide to Galaxy’s Edge before visiting Disney’s Hollywood Studios when the parks open back up!

Will you be checking out these books when they release in June?