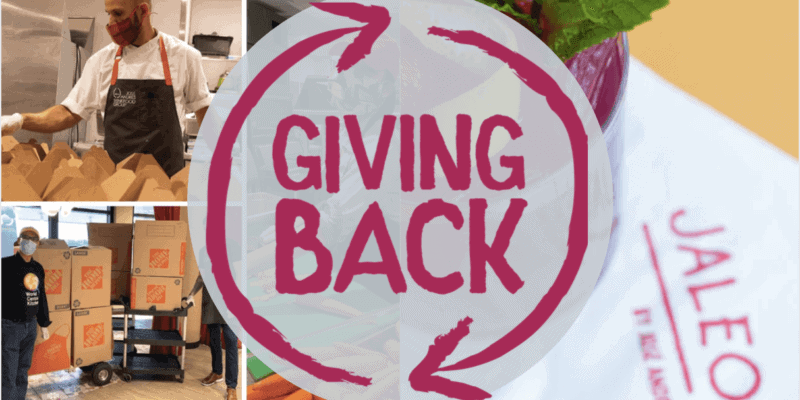 Though it remains closed due to the current pandemic, Disney Springs restaurant Jaleo by José Andrés has been donating thousands of meals to local healthcare heroes.

Jaleo by José Andrés opened last year at Disney Springs. The first Jaleo location opened in Washington D.C. in 1993 and the Disney Springs establishment is the fifth in the United States, including a prevalent location on the Las Vegas strip.

Chef Jose Andres has created a menu filled with Spanish-inspired fare, including the popular patatas bravas. The website describes as an “extensive variety of tapas reflecting the rich regional diversity of traditional and contemporary Spanish cuisine in addition to a variety of authentic paellas cooked over a wood fire in the restaurant.”

The Orlando Jaleo only operated for about a year before being forced to close by the state of Florida’s stay-at-home order. Their relative newness to the community hasn’t stopped them from giving back during these trying times, though!

As a matter of fact, since the beginning of April, the Jaleo team has donated over 5,000 meals to healthcare workers, first responders, and underserved families in the Orlando area. This news comes per the Think Food Group, the company behind the entire José Andrés restaurant family.

Delgado stated, “We believe that a nourishing meal especially in a time of crisis is more than just a plate of food. It is something that reminds you that you are not alone. And that provides hope and dignity.”

Over the course of the coming week, the Jaleo Disney Springs Commissary intends to prepare over 4,000 more free meals for healthcare heroes in Central Florida.

We love to see Jaleo donating meals to those who are on the front lines right now! Share an encouraging word with everyone involved with this community kitchen in the comments.

Jaleo Disney Springs joins the Walt Disney Company in giving back during these trying times. In addition to celebrating doctors, nurses, and other essential medical workers on World Health Day, Disney Parks around the globe have been donating food items to local food banks and outreach programs.

Furthermore, Cast Members have taken it upon themselves to secure a variety of donations for healthcare professionals. The Disney family of companies have provided everything from sought-after N95 masks to rain ponchos that prolong the life of scrubs.

Disney World has also brought happiness to isolated members of the Orlando community during quarantine. The horticulture team provided Easter lilies to nursing facilities where elderly individuals were isolated on Easter Weekend.

Comments Off on Disney Springs Restaurant Jaleo Donates Over 5,000 Meals to Healthcare Heroes