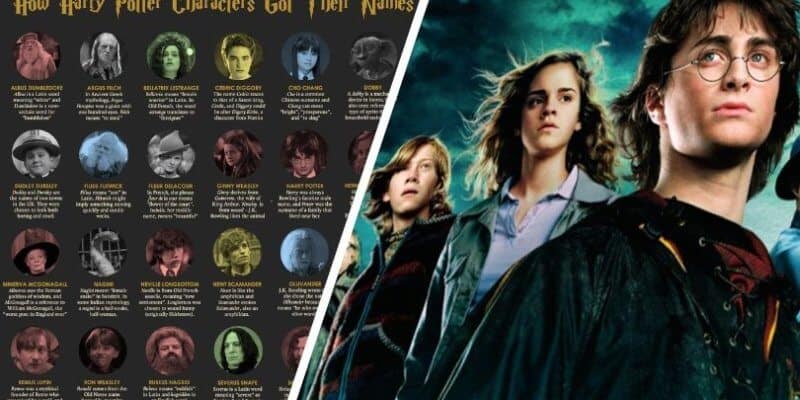 Have you ever wondered what your name means or where it came from? If so, you probably have Googled the meaning of your name, or asked your parents why they gave you your name.

Now, try to think about how novel authors come up with the name for their characters. Would you like to know the thought process behind it? Or, maybe, it’s just completely random?

Despite the process, a Reddit user named u/etymologynerd who claims to be a Harvard linguistics student, decided to dissect the meaning of some our favorite characters from the Harry Potter saga!

“I made an infographic explaining the origins behind some Harry Potter character names,” wrote u/etymologynerd in his post on reddit.

And it looks amazing!

If you are having trouble reading from the image above, you can have a better look at it through this link.

Yet, we at Inside the Magic decided to get some of our favorite ones to share with you guys. One Inside the Magic writer said “I am not a huge Harry Potter fan, however, I have seen the first three films. With that being said — I find Severus Snape’s meaning extremely intriguing as well as Voldemort’s!”

Severus is a Latin word meaning “severe” or “serious” and Snape is the name of the town in eastern England.

The phrase vol de mort can mean either “flight of death” or “theft of death” in French. Tom Riddle anagrammed later.

While another Inside the Magic writer said “Honestly, the meaning behind Sirius Black’s name has always been my favorite.”

Sirius, the brightest star in the sky, is referred to as the “dog star,” and Black is just the color.

Two of our Inside the Magic writer’s absolutely loves Luna Lovegood and the meaning behind her name!

Luna is the Latin word for “moon” and Lovegood refers to her optimism and friendliness. Intentionally alliterative.

Some other favorites included:

A dobby is a mechanical device in looms, but it also once referred to a type of sprite that did household tasks at night.

Sybil was the name of a Ancient Greek oracle and Trelawney is a Cornish surname chosen to sound impressive.

Hermione is a name from Shakespeare’s The Winter’s Tale, and Granger is from Old French grangier, “farmer”

Which Harry Potter character name meaning is your favorite? Do you know the meaning of your name? Let us know down in the comments.