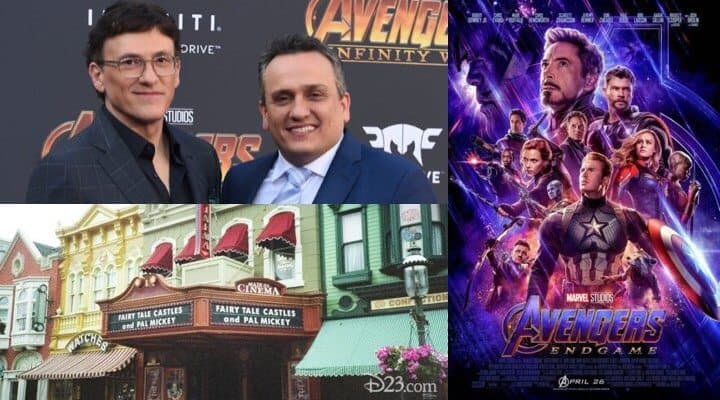 The current health pandemic has taken so much from us a global community. Of course, the tragic loss of life is the biggest blow, but the stagnation of the economy via the closure of theme parks, restaurants, and movie theatres has also hit hard.

As a movie buff, the closing of the cinemas breaks my heart. There’s really nothing like seeing a film in the cinema, and as great as streaming services like Disney Plus are; they just can’t capture the magic of the movie theatre.

Two people that seem to agree are Joe and Anthony Russo, the visionary directors behind not only the vastly satisfying Avengers: Infinity War and Endgame, but also Captain America: The Winter Soldier and Civil War.

While speaking on CinemaBlend‘s podcast to promote their new film, Extraction, the Russo brothers mentioned that they’d love to re-open the cinemas with their Marvel movies:

‘The theatrical experience is a community experience. Perhaps the most touching moment of our entire careers was a few weeks ago when the lockdown started, and Endgame was trending on social media because everyone was posting videos of opening-night screenings in their theatres with audiences really emotionally connected to the material. For us, that’s really the strength of the theatrical experience is that it combines audiences, and it combines you globally. To have been a part of movies that did that, on that scale with that level of emotional connection from the audience, was really very touching, and will be the highlight of our careers. So, using those films to get people back into the theatres? We would be ecstatic. I mean, any opportunity for people to go back and share in those stories together is one that we would support.’

Saturday marked the one-year anniversary of Endgame’s release, and the nostalgia certainly took hold as the movie started trending on social media. Personally, I would die for the chance to be able to see Infinity War and Endgame back up on the big screen again.

That ‘Avengers Assemble’ moment will stay with me forever. Captain America, Iron Man, and every other avenger have become lifelong friends that make us feel like we’re a part of their story. Personally, I’d love to see every Marvel Cinematic Universe movie get a movie theater re-release (except Thor), though I doubt the film industry will allow it.

Still, when superhero giants like the Russo Bros want MCU films back in cinemas, maybe Hollywood will have to listen…

What do you think about the Russo brothers’ suggestion? Do you think that any producer at Marvel will take this on board? When the world re-opens would you go and see Infinity War or Endgame at the cinema? Let us know in the comments below.