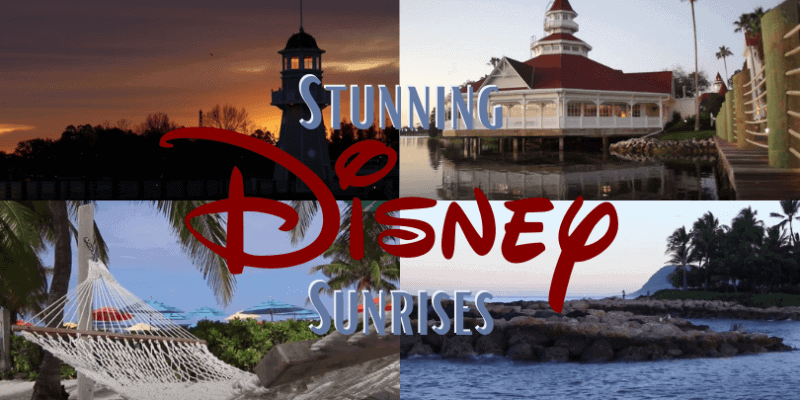 One of the most stunning sights on a Disney vacation is a magical sunrise at a Disney Resort. But unless you’re up early to get your boarding group for Star Wars: Rise of the Resistance, you enjoy running in the early morning around your resort hotel, or you love sipping coffee on the balcony of your deluxe resort room, then you probably won’t be waking up before the sun. Luckily, one Disney fan has been documenting stunning Disney sunrises for years.

Since 2016, Ashley Fasso has been filming Disney sunrises, and she has uploaded them to YouTube for the past two years. We’re certainly glad she has kept her passion alive because these videos are breathtaking whether or not you’re a Disney superfan or you’ve been to all of the destinations she has filmed at.

“I started filming sunrises at Disney pretty organically — I woke up very early one day and saw the stillness of the resort out of my window and thought it would be a perfect time really explore the property and enjoy detail that would otherwise go unnoticed amid the hustle and bustle that often accompanies a typical day at Disney,” Fasso shared with Inside the Magic.

She continued to explain to ITM the true meaning behind her Disney Sunrise Series, which has turned into a magical YouTube playlist that you can find here.

Fasso said, “To me, there is something so special about sunrises in general. The world is coming to life around you and there’s the promise of a fresh, new day. There’s also about 10 minutes when the sun is just cresting the horizon where the sky displays an unimaginable spectrum of colors. It’s truly magical.”

But beyond just the beauty of a sunrise, there is something about experiencing this magic while on a Disney vacation that makes Fasso’s videos so unique. She pointed out that very few people take the time to experiences sunrises every day, and often at a Disney Resort, guests are sleeping in after their busy theme park adventures the day before. So she has spent time while on vacation recording the sunrise in hopes of bringing a unique form of magic to any Disney fan who needs it.

“I hope this series allows viewers to enjoy a different perspective and take in the detail to design, the attention to hospitality and the appreciation of what makes Disney so beloved,” Fasso said to ITM. “It is possible to find zen at Disney.”

So, what’s next for this Disney lover? She hopes to visit every Disney property in the world so she can film a sunrise at each of them. She shared with Inside the Magic that not only would she love to show off every Disney Resort — from Paris and Shanghai to Hong Kong and Tokyo, and of course right here in the U.S. with Disney World and Disneyland — but also she’d be interested in filming sunrises on Adventures by Disney trips.

After we spent some time watching each of Fasso’s videos in her Disney Sunrise Series, we can hardly choose a favorite. But based on the setting and overall atmosphere of each of her filming locations, Aulani, Disney’s Polynesian Village Resort, and Castaway Cay have to be among our top picks.

No matter what your favorite Disney Resort hotel is — and no matter if you’ve visited any of the locations Ashley Fasso features in her videos — you’re sure to enjoy them. We love using this playlist as the perfect background noise for working from home, reading, and even Disney vacation planning.

Learn More: Plan your next Disney vacation with Academy Travel!

“The Beach Club was by far the most beautiful sunrise, but the Contemporary rendered an early morning armadillo spotting!” Fasso shared when asked of her favorite sunrise she’s ever recorded. “”I would have to say that Aulani was my favorite for its location and theme. The best part about creating these videos is honestly just to have these to look back on as wonderful memories.”

“Since I started filming — and now I have 15 videos total — Disney sunrises have actually become my favorite part of Disney vacations. I feel like it is such a well-kept secret, but at the same time it is completely free and attainable to anyone who can open their eyes at 5 a.m.”

You can check out Ashley Fasso’s Disney Sunrise Series on YouTube here.

Comments Off on Have You Ever Seen a Sunrise at a Disney Resort? See These Stunning Videos!