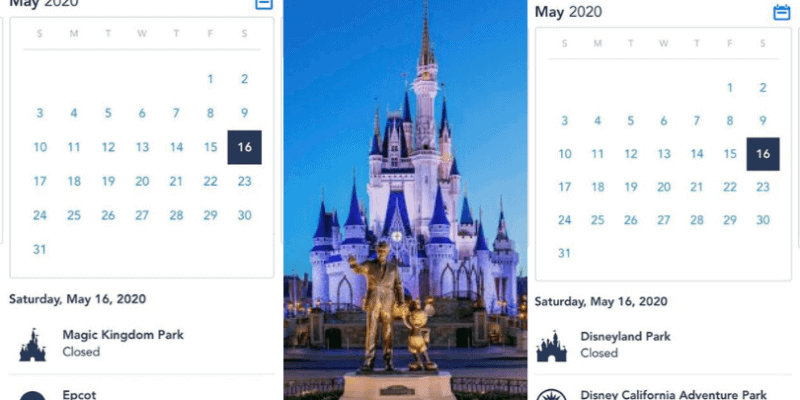 As of today, April 23, Disney has removed all theme park hours for the U.S. Disney Parks through the middle of May.

Upon checking the Disneyland Resort and Walt Disney World Resort official websites, as well as the Disneyland app and My Disney Experience app, we found that theme park hours have been removed through May 16 for all U.S. Disney Parks.

As you can see in the screenshots below, the Disney World calendar shows that through May 16, the parks are closed. Hours are listed beginning May 17. The screenshot below displays the Magic Kingdom and EPCOT hours, but information for Magic Kingdom, EPCOT, Disney’s Hollywood Studios, Disney’s Animal Kingdom, Typhoon Lagoon, Blizzard Beach, and Disney Springs are all online.

In the screenshots of the Disneyland calendar, you can see that through May 16, the parks are listed as closed. And starting May 17, the calendar says “Schedule Unavailable.” You can see the unavailable hours for both Disneyland park and Disney California Adventure park on the app and online.

Also note that the removal of theme park hours through only May 16 does not indicate when Walt Disney World Resort and Disneyland Resort will reopen. At the time of this article’s publication, we do not know an official opening date for either Disneyland or Disney World. The parks are still closed until further notice, and even though Disney has spoken on a possible new normal for the parks in the future, a reopening date has not yet been publicly announced.

It’s also important to note that Disney has been automatically canceling vacations through the middle of May. An Inside the Magic reader reached out to us to share that her vacation originally scheduled for mid-May had been canceled by Disney, and Disney reached out to her regarding next steps. You can read that story here for more details.

We at Inside the Magic hope that everyone continues to stay safe and healthy during this time. We will continue to keep our website up-to-date as more information regarding Disney Parks closures and reopening becomes available.