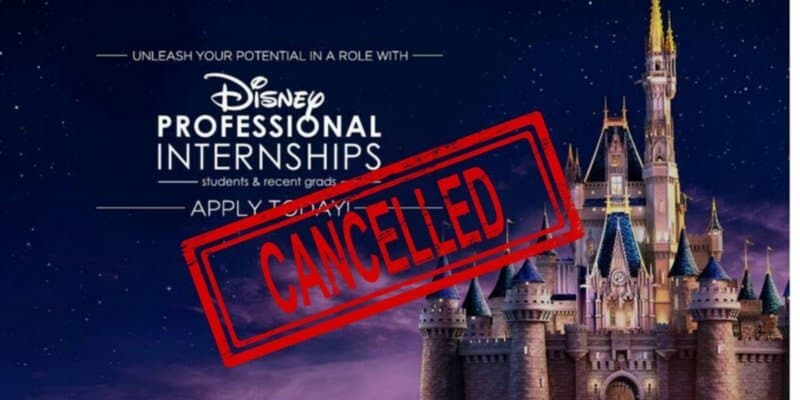 This just in — Disney Professional Internships have officially canceled their upcoming program.

On April 6, 2020, Inside the Magic reported that the initial suspension only applied to the Disney college program, International Programs, Culinary Program, and Cultural Representative Program and that Disney Professional Internships appeared to be exempt. (You can see this in the tweet below).

Related: OpEd: The Suspension of the Disney College Program Was an Incredibly Difficult But Necessary Decision

Update as of 12:30 p.m. EST – This is for our Disney College Program, International Programs, Culinary Program and Cultural Representative Program effective April 18.

But now, our sources say that they were sent email confirmation from Disney that their professional internship had been canceled due to the current pandemic. Although Disney Professional Internships has not yet made an official announcement on social media, we do know they are starting to email their applicants to inform them of the news.

A twitter user has even taken to Twitter to report the cancellation of her Professional Internship as well.

another thing corona virus has cancelled; my year long professional internship with disney 🙂

Another twitter user shared this information about her Disney Professional Internship. The Twitter user shared the email that they received which basically states that due to the current global pandemic, Disney is continuing to focus on the safety and well-being of their guests and Cast Members.

Just got told everything was put on hold…. the matter of the fact is … I left Disney to further my education. I finally received my degree and I was going to be doing a professional internship with Disney… I was going to be moving to Orlando… pic.twitter.com/whkYJ90bIv

One of Inside the Magic’s readers, Alexandra, was impacted by this announcement and even shared her thoughts. Though, she is extremely saddened by the news, she also shared that her leaders have been extremely positive and uplifting during these hard times, which has been incredibly helpful. She stated:

“As a current PI who is impacted by this, it’s incredibly sad- there is no denying that or trying to find a silver lining. But hats off to all my leaders who have been so positive during this time. They are trying to make the best out of this situation for me, and I’m very grateful for them.”

On April 6, 2020, Disney Internships & Programs stated that the Disney College Program and International Programs were ending earlier than anticipated:

In the official Disney announcement made a few days ago, the Walt Disney Company also stated, “Additionally, we are saddened that we will not be able to welcome future Disney Internships & Program participants, who were due to arrive through early June. We will also be refunding their program fees.”

According to the official Disney Internships & Programs Facebook page:

The Disney College Program is an opportunity for students to participate in a paid internship at Disneyland Resort or Walt Disney World Resort. You will build upon your strengths and interests and gain real-world experience while working in various front-line roles including merchandise, entertainment, attractions, food and beverage, housekeeping, lifeguarding, and many more.

Disney Professional Internships provide the opportunity to work alongside industry leaders in your field of study and build upon the skills you’ve learned in the classroom with a family of legendary brands passionate about creating world-class experiences on a global scale.

As part of our Disney Culinary Program, you will work alongside top industry chefs, create lasting memories and culinary experiences for our guests and master your craft with one of the most recognized hospitality destinations.

How has the current pandemic affected your Disney plans? Let us know in the comments.