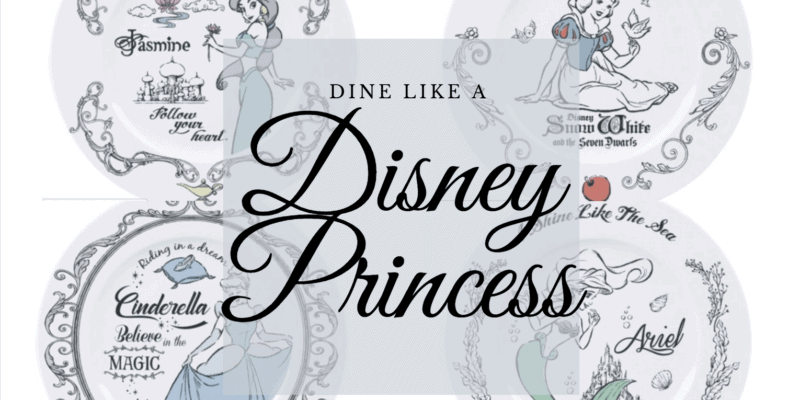 If you’re anything like us, you still love the magic of Disney World and Disneyland character meals no matter how old you get! Since we can’t dine at Cinderella’s Royal Table right now, we’re bringing you the next best thing.

These beautiful officially licensed Disney Princess dinner plates feature Jasmine, Snow White, Cinderella, and Ariel, so you can have a Princess meal anytime you want. The plates are sold as a set of four for $50.99.

Each plate in the set features stunning black and white detailing with pops of color that match each Princess’s outfit from her animated Disney film.

Jasmine’s plate showcases Genie’s magic lamp, Agrabah’s castle, and the phrase “Follow your heart.” We love the inclusion of a lotus flower, which symbolizes triumphing over obstacles in many Middle Eastern cultures!

Her glass slipper and carriage also make an appearance on this dreamy dinner plate.

The final plate in this Disney Princess dinnerware set of four features Ariel and her beloved sidekicks, Flounder and Sebastian! Ariel swims “under the sea” with her castle in the background. The plate features the phrase “I Shine Like The Sea” at the top.

The Merchoid.com website notes that these beautiful Disney dinner plates are almost sold out, so order your set soon! The 8″ plates are dishwasher and microwave safe and are expected to ship in May 2020.

If you love these plates, but can never have too much Disney in your kitchen, check out this adorable Disney Princess tea set from Pottery Barn and these limited-edition Disney Princess Tervis water bottles. Making everyday life feel like a fairy tale has never been easier!

Comments Off on Make Every Day a Fairy Tale With Gorgeous Disney Princess Plates!