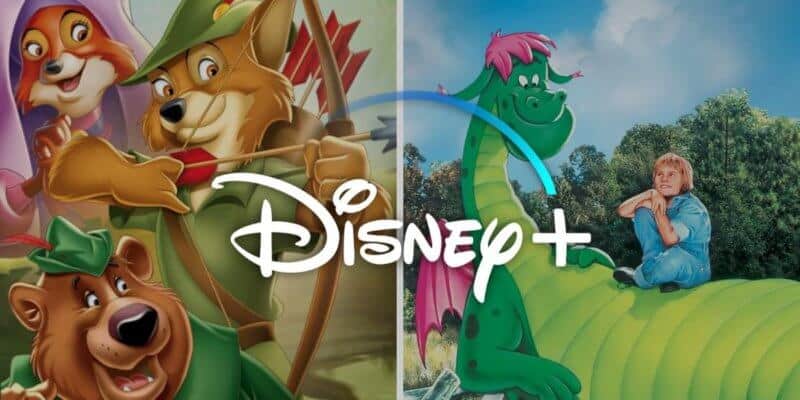 Let’s hop in a time machine and go back to the 70s — When classic jeans were called bell bottoms, Bohemian Rhapsody by Queen hit the radio, and some of the best Disney films were released!

Disney Plus is having the ultimate throwback week by taking a stroll down memory lane by watching some of the best stories which helped shape entertainment today.

Disney’s streaming service is filled with a ton of throwbacks all through the decades — So let’s take a look at the ultimate 70s playlist.

Please note: Each description below is the official Disney Plus movie description.

In 1940 an eccentric young English spinster becomes an apprentice witch. With the help of three children and her unwitting mentor, she finds a magic spell on the legendary Isle of Naboombu, then uses it to rout a band of German commandos intent on invading England.

Two young extraterrestrial orphans with supernatural powers attempt to discover the truth about their mystery-shrouded past. Complications arise when they are made wards of a ruthless millionaire who wants to exploit their unusual powers.

Los Angeles teeters on the brink of disaster when two greedy criminals manipulate a boy’s supernatural powers for their own devious gain. But the boy’s sister and a streetwise band of truants join forces to try to save the city from destruction.

The Strongest Man in the World

A college science wiz creates a new supercharged vitamin compound that accidentally ends up in his cereal box. The powerful formula comes to the attention of two rival cereal companies, touching off a hilarious chain of events. This program is presented as originally created.

A Disney Animation Film — This heartwarming musical adventure film follows the friendship of a young orphan boy and his invisible pet dragon, who flee from his cruel guardians to a small fishing village in Maine.

The first Star Wars film — Young boy Luke Skywalker is thrust into a galaxy of adventure when he intercepts a distress call from Captive Princess Leia.

Young boy David Burnie and four friends use a secret map in a dangerous search for pirate gold in this post-Civil War adventure. This program is presented as originally created. It may contain outdated cultural depictions.

The inept California Atoms, floundering in the cellar of the National Football League, welcome the team’s newest member—a mule capable of placekicking a football 100 yards with deadly accuracy.

Lincoln Costain, a mid-19th century Texan cowboy, is shanghaied and placed aboard a ship bound for Hawaii. … But first, he must outwit an unscrupulous businessman, outfight an evil witch doctor and turn the easy-going islanders into the ridin’ and ropin’ cowpokes.

Welcome to Candleshoe, a stately English manor where a swashbuckling pirate hid a fortune in Spanish doubloons centuries ago. And that’s what young orphan Casey and a sly con man are determined to find. … Casey eventually discovers there may be an even greater treasure at Candleshoe – the love of a happy family.

After Kermit the Frog meets a talent scout, he’s off to Hollywood with big dreams, joined by Fozzie, Gonzo and Miss Piggy.

Jessica Drew was bitten by a poisonous spider as a child; her father saved her life by injecting her with an experimental “spider serum, which also granted her superhuman powers.

A girl goes on vacation to the mountains where she finds a wild horse named Hacksaw. With a little help, she captures the stud and it doesn’t take long until the man who helped her starts wagon racing, since Hacksaw refuses to have any man or woman on his back.

Lonnie, the son of a topflight dog trainer, refuses to give up on a ragged old dog his dad calls “a good-for-nothing biscuit eater.” With the help of his buddy Text, they take on the almost impossible task of turning him into a champion bird dog. This program is presented as originally created.

Which one of these 70s Disney films will you be watching first? Let us know in the comments.

Comments Off on What To Watch On Disney+: The Ultimate 70s Movies Watchlist