Five new Disney Blu-ray releases recently hit store shelves, featuring six films spanning several decades – some classics, some not so much. But amidst these new home video options every Disney fan will find some solid entertainment. 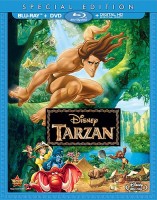 Tarzan is one of those often forgotten Disney animated films, released in 1999 in the midst of Pixar rising to the top of its game. But it deserves another look, if for no other reason than to marvel at its visual appeal, a nice blend of 2D traditional animation and CG elements. The characters of this film definitely aren’t among Disney’s most popular, but the overall production is enjoyable to watch, more so than ever on Blu-ray.

Sadly, there are no Blu-ray exclusive bonus features created for this release, leaving those that are included to immediately stand out as dated, especially when compared to the crispness of the new “Tarzan” transfer. 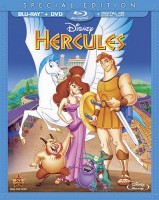 Hercules certainly has built a strong following, particularly for its supporting cast of Megara and Hades along with its catchy songs. But fans may be disappointed by this first time Blu-ray release, adding no new bonus features (only recycling old ones). Video and sound quality are good, certainly better than any old DVD or VHS releases.

Without any new extras, this bare bones version feels a bit naked. “Hercules” isn’t up there with “Aladdin” or “The Little Mermaid,” but it’s popular enough to deserve a bit more attention than this release gives it. 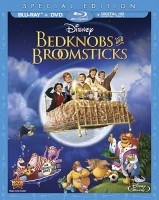 Bedknobs & Broomsticks is the younger sibling of Disney classic “Mary Poppins” with more than a few similarities. Both feature stunning (for their time) special effects, interesting songs, and a lead role by David Tomlinson. But while “Bedknobs” is definitely a Disney classic, it never quite caught on in the same way “Poppins” did, despite still winning an Oscar for visual effects. It’s a great filmmaking achievement, but ultimately a bit more forgettable. That said, even today’s children will enjoy this fantasy filled adventure. Bonus features include a look at the famous Sherman brothers making the songs of the film (a recycled old extra) as well as a much newer look at the creation of some of the film’s special effects that’s quite interesting. 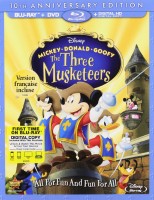 The Three Musketeers definitely comes across as one of those movies you pop in to keep kids entertained and out of your hair. There’s nothing particularly fascinating about it. The animation style is flat and rather drab. Its voice acting is entertaining but there are many better choices from the animated world of Disney to watch instead. Even this release’s bonus features clearly show the age group this is targeted at, with a “Get Up and Dance” extra seemingly designed to occupy tire out young ones. 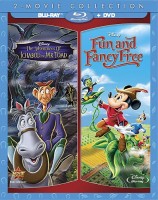 Adventures of Ichabod & Mr Toad / Fun & Fancy Free is the one recent release that is not on Blu-ray for the first time, simply paired up like this in a “2-movie collection.” Why these two films belong on the same disc is anyone’s guesss. “The Adventures of Ichabod and Mr. Toad” is always a fantastically enjoyable film, bringing together Disney history with a bit of literary history as well. Its Blu-ray presentation makes it nearly look brand new. On the same disc, the much lesser known “Fun and Fancy Free” feels more like an extra. It’s not bad entertainment (certainly better than “The Three Musketeers” in visual appeal alone), but it doesn’t hold up to “Toad.” Also included as the sole bonus feature is Disney’s “The Reluctant Dragon,” which does make its first ever Blu-ray appearance, looking crisp and sharp, but also feeling out of place when paired with the other two. It’s an odd assortment that’s good for those who are looking to flesh out their Disney movie collections.