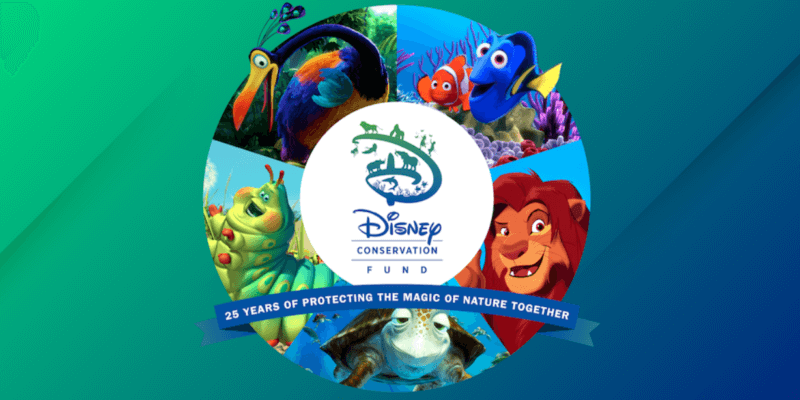 This year, The Disney Conservation Fund (DCF) is celebrating 25 years of impactful and positive change.

On Earth Day in 1995, the Disney Conservation Fund was born as an idea to help protect wildlife and support conservation efforts worldwide. Thanks to countless donations from both the public and the Walt Disney Company, the DCF has been able to donate 100 million dollars and counting to hundreds of important nonprofit organizations dedicated to the care and love of the environment.

The Imagineers who worked on Disney’s Animal Kingdom Park in it’s developmental stage, believed that in order to tell great stories there, the park and company had a duty to live what it was teaching. Joe Rodhe — Creative Executive with Disney’s Imagineering — said the following in regards to the conservation fund.

“When we, Imagineers, started the development of Disney’s Animal Kingdom, we knew that we were entering a new territory of storytelling,” Rohde said. “These stories were not fantasies, but real. They were not classic tales, but ongoing epics whose conclusions are still unknown. They were not ours alone, but shared with people all around the world, who lived with and cared about the lives of wild creatures.”

He continued, “We could not tell such stories unless we ourselves participated in the reality we were describing, contributed to the epic struggle, and shared our skill and our commitment with people around the world. Thus, we concluded that an entity like the Disney Conservation Fund was essential to our story. Without it, our own words and actions would be empty.”

“The story of Disney’s Animal Kingdom and the Disney Conservation Fund is not just a story that we tell. It’s a story we are living every day, every one of us. All of us on Earth share this planet with every living creature and with the systems that sustain them,” said Rohde. “For two decades now, through the actions of the Disney Conservation Fund, we’ve worked towards our dream: a dream of a future for our children in which there is still magic in the forest, the magic that comes from the countless miraculous creatures, some yet undiscovered, that share with us a tiny delicate place amidst a sea of distant stars.”

As we joyfully celebrate the 25th anniversary of this amazing effort from Disney, conservationists around the world are celebrating as well. Famous primatologist, Jane Goodall shared a video message with the company, thanking them for their support of her conservation projects over the life of the DCF. Click HERE to watch the video!

Jane Goodall and Disney have had a longstanding relationship and soon, her very own documentary, JANE GOODALL: THE HOPE, will be premiering on Disney platforms. Check out this film on April 22, at 9/8c on National Geographic, National Geographic WILD, and streaming services (Disney+ and Hulu) beginning Earth Day.

To learn more about Disney’s various conservation projects, you can check out their new FREE digital book titled The Disney Conservation Fund: Carrying Forward a Conservation Legacy by clicking HERE.